WATCH | ‘I’d rather swim with sharks’ — Would you take a dip in this see-through sky pool? 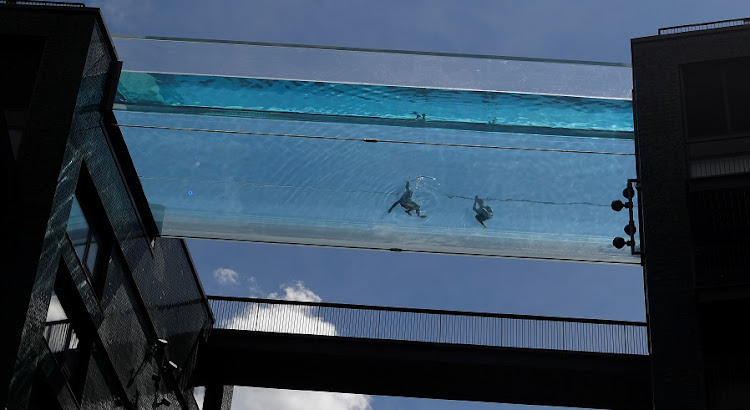 Swimming can be scary for many of us, but imagine doing laps in a see-through pool suspended 33.5m in the air?

If you would rather eat grass than walk over a glass bridge at a fancy shopping mall, you might not want to take a dip in the Sky Pool.

It is reportedly the world’s first “floating” see-through pool more than 33m above the ground, and is suspended between the tenth floors of two buildings in London, England.

It has a deck and ladders on each side and the middle of the pool is entirely suspended in the air with glass walls and floor.

It has been described on social media by some as “like flying, but in water”.

Swimmers enjoy warm weather in London at the Sky Pool which is believed to be the world’s first transparent pool built between two skyscrapers
https://t.co/mtRX8qvt0a pic.twitter.com/2skTGK9Jp7

According to House Beautiful, structural engineers and designers performed hours of vigorous strength testing the pool's structure to make sure it is safe.

That wasn’t enough to convince many on social media, who flooded the TL with reactions.

While some said they would love to take a dip, others said it was their worst nightmare.

It also sparked a debate about inequality after it was reported that shared ownership tenants in the buildings are not allowed to use the facilities, only residents.

Now, If I lived in those flats, I'd be sorely tempted to either a) stick a transfer image of a crack to the underside of the pool, using a stick, or b) fire small ballbearings at the underside, just to scare the bejaysus out of the swimmers :)

why do I think Mission Impossible when I see this, haha

I know it's an unpopular opinion but I like it !! #skypool #London #heatwave https://t.co/4loxjXRQLs

You could not pay me to go in this pool. I think I'd rather swim with sharks.

I did the sky walk on the Willis (Sears) tower in Chicago. I thought i was going to be Billy Badass and just strut my happy ass on there. Took one step and looked down. My freakin legs got jello-ey and I immediately grabbed a wall. So fuck that pool.

I'd love to do this!
⠀⠀
Swimmers enjoy warm weather in #London at the Sky Pool which is believed to be the world’s first transparent pool built between two skyscrapers. pic.twitter.com/X3sj97jBeU

👀Sky Pool. Rhymes with Die Pool. No thanks.
I'd have a heart attack. https://t.co/DszZtFlAlV

No way you'd ever catch me in that pool. When I first saw this, all I could see was a plane hitting it or something falling out of the sky. Nope
Plus, it reminds me of slides of bacteria I used to have to look at through a microscope.😂

Immerse yourself in these luxe beauty experiences

After hiking in the Robberg Nature Reserve, supping on the Keurbooms River, and sleeping in the wondrous Sky Villa Boutique Hotel, Sanet Oberholzer ...
Lifestyle
2 years ago

From a walking sea safari to snorkeling with seals, there are many ways you can have an unforgettable encounter with our country's marine life
Lifestyle
1 year ago