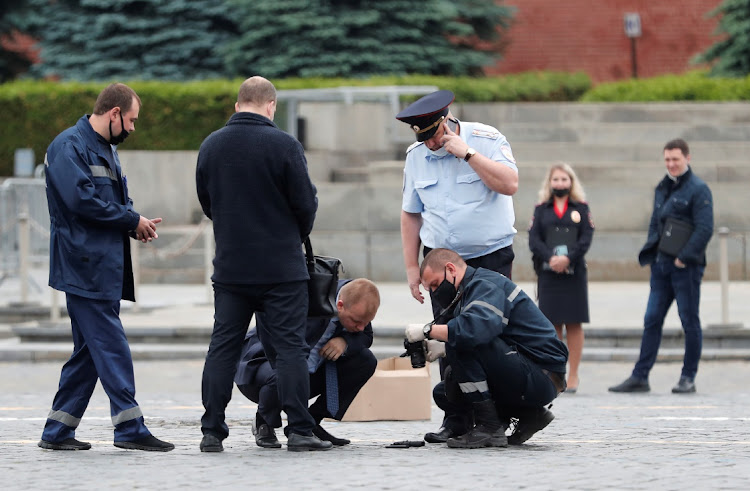 An investigator takes a picture of a gun in Red Square after opposition activist Pavel Krisevich reportedly simulated shooting himself in the head in a political protest, in Moscow, Russia June 11, 2021.
Image: REUTERS/Shamil Zhumatov

Russian police detained an opposition activist on Moscow's Red Square on Friday after he simulated shooting himself in the head in a political protest, social media images showed and one of his allies told Russian media.

It cited a friend of his as saying he was fine and that the incident had been a political protest in which he had apparently fired blank shells, first in the air, and then at his head, to make it all look real.

“Pavel is fine, he was not hurt. It was just a protest,” MBKh quoted the friend, Anastasia Mikhailova, as saying.

Krisevich was jailed last year for 15 days after staging a crucifixion stunt near the central Moscow headquarters of the FSB security service.

The Open Media news outlet said Krisevich had prepared a manifesto before Friday's protest, making it clear it was designed to draw attention to what he cast as unacceptable state repression.

A Russian court on Wednesday outlawed groups linked to jailed Kremlin critic Alexei Navalny after declaring them “extremist”, a move that bans his allies from taking part in September parliamentary elections.

Washington, which has asked Moscow to free Navalny, condemned the court decision, with the State Department calling it “particularly disturbing.”

The Kremlin says it tolerates political opposition if it is done lawfully, but has portrayed Navalny and his allies as US-backed trouble makers intent on triggering social unrest.

There was no immediate comment from the police on Krisevich's actions.

Jailed Kremlin critic Alexei Navalny has been returned to the original correctional facility where he had been serving out a sentence after he ...
News
6 days ago

Jailed Kremlin critic Alexei Navalny on Wednesday lost a legal bid to overturn his designation as a flight risk, a label which he says allows prison ...
News
1 week ago

Kremlin critic Alexei Navalny said he had been informed in prison about three new criminal investigations against him, according to a post on his ...
News
2 weeks ago