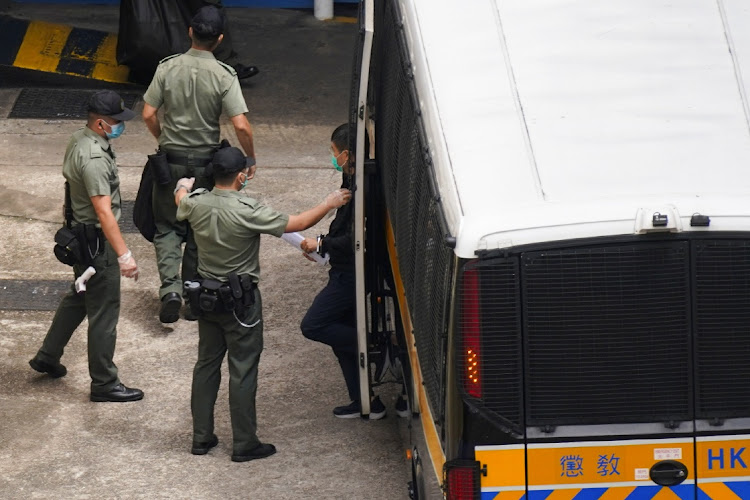 Two executives of Hong Kong pro-democracy newspaper Apple Daily, charged under a national security law, were denied bail on Saturday in a case that has drawn international condemnation and stoked fears over media freedoms in the financial hub.

Editor-in-chief Ryan Law 47 and CEO Cheung Kim-hung 59 were among five Apple Daily executives arrested on Thursday when 500 police also raided the outlet's newsroom, which authorities described as a “crime scene.”

Police said on Thursday dozens of the newspaper's articles were suspected of violating the national security law. It was the first case in which authorities have cited media articles as potentially violating the contentious legislation.

Law and Cheung, who are charged with “collusion with a foreign country or with external elements to endanger national security” appeared at the West Kowloon Magistrates' Courts on Saturday and were denied bail by Judge Victor So.

They will next appear in court on August 13.

The pair are accused of colluding with Apple Daily owner and staunch Beijing critic Jimmy Lai between July 1 2020 and April 3 April 2021 to request a foreign country, person or organisation “to impose sanctions or blockade or engage in other hostile activities against the Hong Kong Special Administrative Region or the People's Republic of China,” according to a charge sheet.

The National Security Law came into force in Hong Kong just before midnight on June 30, 2020.

Judge So said Law and Cheung were denied bail because there was insufficient evidence to believe they would not endanger national security.

Under the security law, the onus is on defendants to prove they will not pose a security threat if released on bail.

As part of their bail application, Law and Cheung had offered to resign their roles at Apple Daily, not speak to media and foreign politicians and pay cash bail — HK$3 million ($386,463.47) for Cheung and up to HK$200,000 for Law.

Three companies related to Apple Daily that are also being prosecuted for collusion with a foreign country appointed people to represent them in court. Authorities have frozen HK$18 million ($2.32 million) of the companies' assets.

“We will still publish the newspaper tomorrow. We will try our best to keep running,” said Chan, who attended Saturday's hearing and was speaking outside the court after bail had been denied.

Earlier on Saturday, crowds had gathered outside the court ahead of the hearing, some holding yellow umbrellas or wearing Apple Daily T-shirts saying, “No fear, fight on.”

The National Security Law punishes what Beijing broadly refers to as secession, subversion, terrorism and collusion with foreign forces with up to life in prison.

The arrests and scale of the Apple Daily raid have been criticised by Western nations, global rights groups, press associations and the chief UN spokesperson for human rights.

Apple Daily and its listed publisher Next Digital have come under increasing pressure since Lai was arrested last year under the legislation.

Lai, whose assets have been frozen under the security law, is already in jail for taking part in unauthorised assemblies and awaiting trial in his national security case.

As investigations into Apple Daily and its senior executives ramp up, some employees and observers have expressed deepening concern over the newspaper's future.