In India's storm-battered Sundarbans, villagers have no place to call home 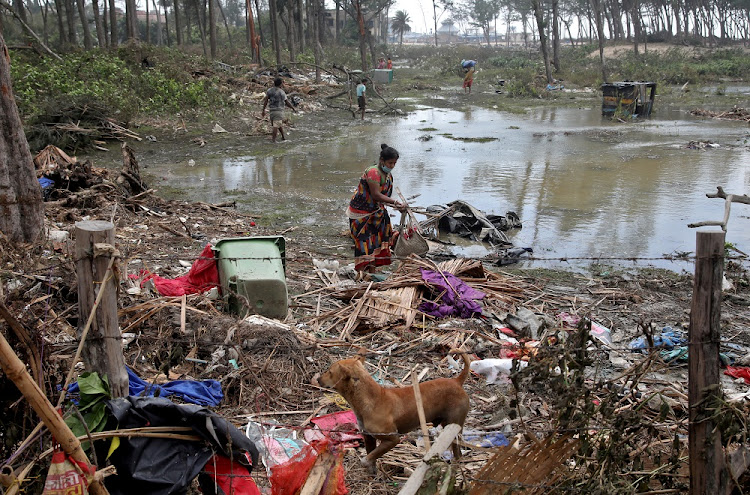 Perched atop a tree, Nur Islam watched the waters rise, breach the mud embankments and smash down the wall of his home in the Sundarbans when Cyclone Yaas hit India's east coast last month.

A month later, Islam still has not repaired the wall because of a high tidal-wave alert issued for later this week.

“How many times can I fix a broken house?” he asked over the phone from his village in the heart of the low-lying Sundarbans delta in South 24 Parganas district of West Bengal state.

“Let the high tide come and if there is no other disaster forecast, I will build the wall. I cannot afford to do it over and over again — the cyclones and tidal waves are relentless.”

Having a house with no walls has meant a much longer stay at an overcrowded relief centre for Islam's family, despite health concerns amid the Covid-19 pandemic.

Schools in the region have doubled up as emergency shelters, with each classroom occupied by up to five families.

People are sleeping on cloths spread on the ground, struggling to get clean drinking water and constantly worried about the crowded conditions, aid workers said.

Being in the centre “is not like home”, said Islam, adding there was no other choice.

Life has been getting harder for thousands like him who live in the Sundarbans, a UN-designated biosphere reserve with one of the world's largest mangrove forests that has been ravaged over the years by storms, coastal erosion and shrinking land.

Many of its islands lie below high-tide level, and the earthen embankments that protect homes and farms are frequently breached, resulting in mass evacuations.

Siyad N, additional district magistrate for South 24 Parganas, told the Thomson Reuters Foundation 400,000 residents of the area were moved out of harm's way before Yaas hit.

“Unlike in the past, when people would be able to go back home within a few days of the event, now many have been in camps for almost a month because the floodwaters have not receded in some parts,” he explained.

“We are concerned and are speeding up relief work.”

In May 2020, Cyclone Amphan crashed into the Sundarbans with winds of 133km (83 miles) per hour, bringing devastation.

But just as people started rebuilding their homes after receiving compensation, Cyclone Yaas made landfall last month, uprooting them again.

At Krishnachandrapur High School, principal Chandan Kumar Maiti has overseen the relief centre, locally known as a “safe house”, for a month now, hosting more than 300 homeless people and causing classes to be suspended.

“This time, the damage was more because of the nearly 2-metre high tidal waves that flooded homes and fields,” he said.

Aid workers and charities said families preferred to go back home, even if it meant erecting two bamboo poles, covering them with plastic and sleeping there in the wreckage.

“It helps them keep an eye on their livestock and few belongings,” said Manashi Das, founder of Dishari, a development charity that works in the Sundarbans.

“But many have been forced to stay on in relief centres and others have camped on embankments, waiting for the water to recede and resources to rebuild,” she added.

After Yaas ruined their efforts again, “many villagers are putting off repairs, patching their homes with plastic sheets and newspaper instead,” he added.

The West Bengal government has initiated a “relief at your doorstep” campaign and is now verifying damage with a plan to start disbursing compensation soon, magistrate Siyad said.

After Amphan, the government planted 50 million mangroves and a good number survived Yaas, he noted.

Identified as a climate-change hotspot, cyclonic storms that form in the Bay of Bengal have become fiercer and more frequent, particularly in the last decade, as sea surface temperatures have warmed, according to researchers.

Data from 1891-2010 showed a 26% rise in tropical storms in India's Sundarbans, researchers at New Delhi's Jamia Millia Islamia university found in a 2020 paper published in the Environment, Development and Sustainability journal.

In a survey they conducted among 570 households in the Sundarbans, up to 60% in coastal villages said they would prefer to migrate because of extreme weather events.

Tanmoy Mondal dreams of starting his own travel agency in the delta. But for now, the 37-year-old migrant worker is putting in extra hours at a bag manufacturing unit in south India to help his father rebuild their storm-hit home.

From his rented place in Mangalore in Karnataka state, he said by phone he had sent his father money to repair their house near the Sundarban Tiger Reserve after Amphan hit a year ago, and now needs to send more because of the damage done by Yaas.

Most people rebuild in stages when they get government compensation instalments and many never manage to complete construction, aid workers said.

“The houses are often unfinished structures that topple down when a cyclone comes,” said teacher Mahato.

The crisis has come at the worst time for people like Mondal and Islam — amid a coronavirus lockdown, job losses and warnings of more tidal activity.

Both men said they did not remember such destruction in their childhoods.

“The playground where we played as children is gone and there is nothing beautiful left in my village. Many of us have written to the government to save our village, our land and our homes,” Islam said.

Magistrate Siyad said residents of Ghoramara island are already moving to bigger islands like Sagar, but the cost is prohibitive for many.

“I wish I could leave but have stopped dreaming about it because I have no money to move,” Islam said.

“I hope I can build a stronger wall around my house before I migrate to work outside the Sundarbans next month. I cannot leave my wife and two children in a house with no walls.”