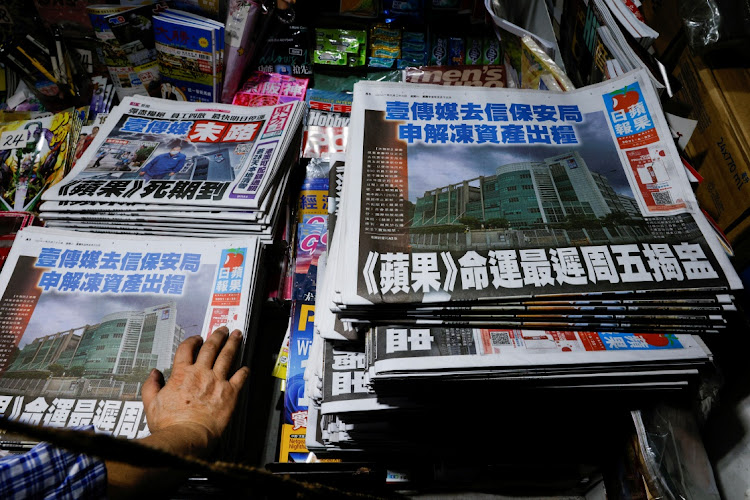 Copies of the Apple Daily newspaper are seen at a newspaper stall after it looked set to close for good following police raids and the arrest of executives in Hong Kong on June 22 2021.
Image: REUTERS/Tyrone Siu

Hong Kong police arrested on Wednesday a columnist for pro-democracy tabloid Apple Daily on suspicion of conspiring to collude with a foreign country or foreign forces, in another hit to the besieged newspaper.

The latest arrest came after police froze assets of companies linked to the newspaper and arrested five executives last week, moves that are likely to force the newspaper to shut down this week.

Police have said dozens of Apple Daily pieces may have violated the security law, the first instance of authorities taking aim at media articles under the legislation.

Rights groups, media organisations and Western governments have criticised the government's actions and expressed concern over freedom of the press and other rights in the Chinese-ruled city.

Hong Kong leader Carrie Lam hit back on Tuesday against criticism of authorities' actions against pro-democracy tabloid Apple Daily as attempts to ...
News
1 year ago

Police, who typically do not disclose the names of those arrested, said they had arrested a 55-year-old man on the national security charges. A senior executive at Next Digital , which publishes Apple Daily, said a lead writer for editorials and a reporter were arrested, without identifying them. It was unclear why the reporter was arrested.

A police representative said they had no immediate information on a second arrest.

Apple Daily has come under increasing pressure since its tycoon owner and staunch Beijing critic, Jimmy Lai, was arrested last year under the contentious legislation. Lai, whose assets have also been frozen under the security law, is already serving a prison sentence for taking part in unauthorised assemblies.

According to an internal staff memo seen by Reuters, the tabloid, which employs about 600 journalists, looks set to close for good by Saturday.

Hong Kong pro-democracy newspaper Apple Daily will be forced to shut “in a matter of days” after authorities froze the company's assets under a ...
News
1 year ago

Two executives of Hong Kong pro-democracy newspaper Apple Daily, charged under a national security law, were denied bail on Saturday in a case that ...
News
1 year ago