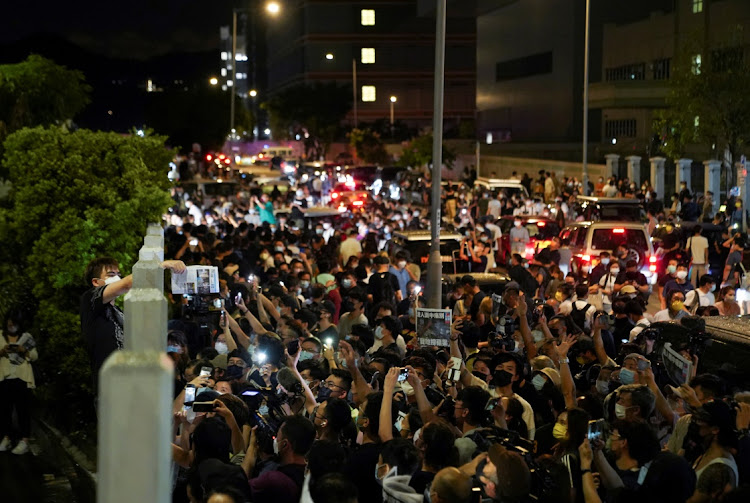 Copies of the the final edition of Apple Daily are handed out to supporters, at the headquarters of Apple Daily in Hong Kong, China June 24, 2021.
Image: REUTERS/Lam Yik

Hong Kong police arrested a former senior journalist with the now-closed Apple Daily newspaper at the international airport on Sunday night on a suspected national security offence as he tried to leave the city, according to media reports.

Police, who typically do not name arrested people, said in a statement that a 57-year-old man had been arrested at the airport for “conspiring to collude with foreign countries or foreign forces to endanger national security”. They added that he had been detained and investigations were continuing.

Hong Kong media identified him as Fung Wai-kong, an editor and columnist at the now-closed paper. If confirmed, he would be the seventh staffer at the pro-democracy Apple Daily newspaper to be arrested on national security grounds in recent weeks.

Reuters could not independently confirm that the arrested man was Fung.

Fung could not be contacted for comment. It was not immediately known if he had legal representation.

Apple Daily, a popular tabloid, was forced to fold following a raid by 500 police on its headquarters on June 17 and the freezing of key assets and bank accounts. It printed its last edition last Thursday.

Where an Apple a day doesn’t keep authorities away

Heartbreak in the newsroom as, after raids and arrests, Hong Kong tabloid goes to print for the last time
World
10 months ago

Authorities say dozens of the paper's articles may have violated a China-imposed national security law, the first instance of authorities taking aim at media reports under the legislation.

Critics of the law, introduced last June, say it has been used to stifle dissent and erode fundamental freedoms in the former British colony that returned to Chinese rule in 1997.

Authorities say the law has restored stability after months of often-violent pro-democracy protests.

Officials in Hong Kong and China have repeatedly said media freedoms are respected but not absolute, and cannot endanger national security. Police have said the actions against Apple Daily were not targeting the media industry as a whole.

Hong Kong leader Carrie Lam said on Tuesday that criticism of the raid on the newspaper amounted to attempts to “beautify” acts that endangered national security. Chinese officials have denounced the criticism as interference.

The shutdown of Apple is the latest setback for media tycoon Jimmy Lai, the newspaper's owner and a staunch Beijing critic, whose assets have been frozen under the legislation and who is serving prison sentences for taking part in illegal assemblies.

Lai is also awaiting trial under the national security law after being charged with collusion with foreign forces. If convicted, he can be sentenced to life in jail.

The Hong Kong Journalists' Association, reacting to reports of the airport arrest, condemned the police for targeting journalists again, and asked them to explain the incident.

Hong Kong leader Carrie Lam hit back on Tuesday against criticism of authorities' actions against pro-democracy tabloid Apple Daily as attempts to ...
News
11 months ago

Hong Kong police arrested on Wednesday a columnist for pro-democracy tabloid Apple Daily on suspicion of conspiring to collude with a foreign country ...
News
11 months ago

The shutdown of Apple Daily has sent a chill through the city's media industry. Online pro-democracy outlet Stand News said late on Sunday it would stop accepting monthly donations from readers and had taken down older commentaries from the platform.

It said in a Facebook post its moves were aimed at protecting supporters, authors and editorial staff and reducing risks of all parties, adding that “speech crimes” have come to Hong Kong. It did not elaborate.

Stand News, founded in 2014, said most of its directors, including barrister Margaret Ng and singer Denise Ho, had stepped down.

Stand News management did not immediately respond to a request for comment.

Its charter states that it shall be independent, autonomous and non-profit. It says Stand News is committed to safeguarding Hong Kong's core values of “democracy, human rights, rule of law and justice.”