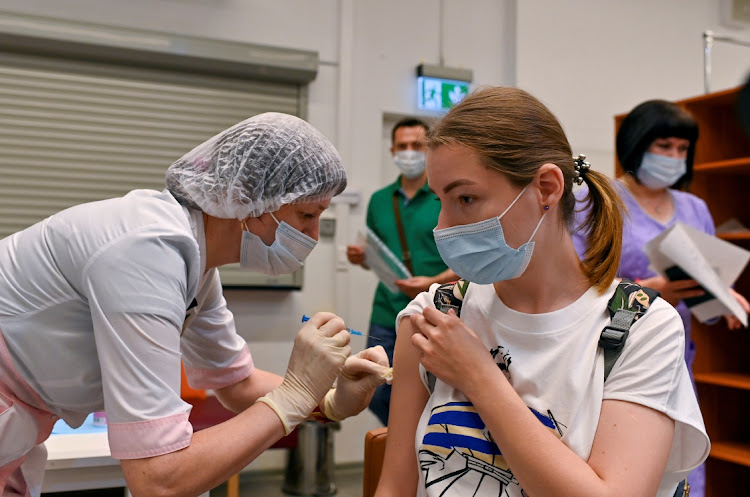 A woman receives a dose of Sputnik V (Gam-COVID-Vac) vaccine against the coronavirus disease (Covid-19) in a vaccination centre at a shopping mall in Omsk, Russia, June 29, 2021.
Image: REUTERS/Alexey Malgavko/File Photo

Russia registered a record number of daily Covid-19-related deaths on Friday amid a surge in cases across the world's largest country that the authorities blame on the infectious Delta variant.

The government's coronavirus task force said 679 people had died in the last 24 hours, the highest figure confirmed in a single day since the pandemic began.

The Russian capital, the epicentre of the outbreak throughout the pandemic, is racing to repurpose hospitals to treat an influx of patients, Anastasiya Rakova, the city's deputy mayor, said.

“Now, with this explosive growth in infections, this (hospital) capacity is no longer enough and we will additionally add other hospitals again to combat the virus, as fast as possible, I hope,” Russian news agencies quoted Rakova as saying.

"(But) we'll do everything possible not to declare a lockdown,” she said.

The surge in cases has prompted officials to impose an array of measures to compel or encourage people to get vaccinated against Covid-19.

Vaccines are widely available, but demand for the shots has been tepid and polls show many people don't want to have them.

Around 2.6 million people in Moscow have had at least the first component of a vaccine out of a population of more than 12.5 million, Rakova was cited as saying.

Moscow will give away cars in a prize draw for residents who get the Covid-19 shot in an effort to speed the slow rate of vaccinations, its mayor ...
Motoring
1 year ago

Three people were killed on Wednesday in a blaze that broke out at a Russian hospital treating patients with Covid-19, the authorities said, with one ...
News
1 year ago

India’s top vaccine maker has been unable to send shots overseas since April, but its problems began long before
World
1 year ago