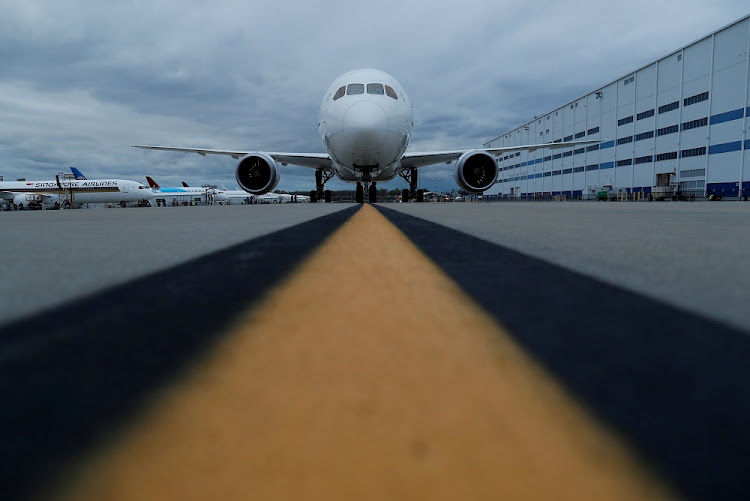 Boeing suspended deliveries of the 787 in late May after the FAA raised concerns about its proposed inspection method, saying it was “waiting for additional data from Boeing before determining whether the company's solution meets safety regulations.”
Image: REUTERS/Randall Hill/File Photo

The Federal Aviation Administration (FAA) said late on Monday that some undelivered Boeing 787 Dreamliners have a new manufacturing quality issue that the largest US plane maker will fix before the planes will be delivered.

The FAA said the issue is “near the nose on certain 787 Dreamliners in the company's inventory of undelivered aeroplanes. This issue was discovered as part of the ongoing system-wide inspection of Boeing's 787 shimming processes required by the FAA.”

The FAA added that “though the issue poses no immediate threat to flight safety, Boeing has committed to fix these aeroplanes before resuming deliveries.” The air regulators added after a review of data it “will determine whether similar modifications should be made on 787s already in commercial service.”

Boeing suspended deliveries of the 787 in late May after the FAA raised concerns about its proposed inspection method, saying it was “waiting for additional data from Boeing before determining whether the company's solution meets safety regulations.”

The FAA in May had issued two airworthiness directives to address production issues for in-service aeroplanes.

The US planemaker's 737 MAX and 787 have been afflicted by electrical and other issues since late last year, and it had only resumed deliveries of the 787s in March after a five-month hiatus — only to halt them again in May.

Two key US lawmakers said in May they were seeking records from Boeing and the FAA on production issues involving the 737 MAX and 787 Dreamliner.

A decades-old Boeing Co 737-200 cargo aeroplane with two people on board made an emergency night-time landing in the Pacific Ocean off the coast of ...
News
11 months ago

In September, Boeing said some 787 aeroplanes had shims that were not the proper size, and some aeroplanes had areas that did not meet skin-flatness specifications.

But he added “the FAA rightfully wants to know more about the analytics and process controls that we put in place, which are different from the ones that we had previously, so that we could be more perfect.”

Calhoun said he hoped the FAA's review of Boeing's approach was “measured in months and not longer than the calendar year.”

The fuel-efficient 787 has been a hit with airlines, which have ordered nearly 1,900 of the advanced twin-aisle jet worth nearly $150 billion at list prices.

The FAA has been critical of some Boeing safety practices in recent years and imposed a $6.6 million fine on Boeing in February for failing to comply with a 2015 safety agreement.

The agency did not allow the Boeing 737 MAX to resume flights for nearly 20 months following two fatal crashes and only after it added significant safeguards to a key system.

Last month, Reuters reported the FAA told Boeing in May its planned 777X was not yet ready for a significant certification step and warned it “realistically” will not certify the aeroplane until mid- to late 2023.