Scuffles flare in Georgia parliament after death of journalist

Image: IRAKLI GEDENIDZE Opposition activists scuffle with police during a rally, following the death of a cameraman who was beaten up during violence against LGBT activists last week, to demand the resignation of the prime minister and government, in Tbilisi, Georgia July 12, 2021. REUTERS/Irakli Gedenidze

Scuffles broke out in Georgia's parliament on Monday as journalists and opposition politicians tried to enter the lower house in protest over the death of a cameraman who was beaten up during violence against LGBT activists last week.

Hundreds rallied in the capital Tbilisi on Sunday after the death of Alexander Lashkarava, one of several journalists who were badly hurt as violent groups ransacked an LBGT+ campaign office, prompting activists to call off their pride march.

Protesters called for the resignation of the prime minister and government whom they accuse of failing to protect journalists as well as allowing street violence by radical groups.

On Monday, journalists and opposition politicians tried to enter parliament to speak to pro-government lawmakers about Lashkarava's death, though most of them were turned away by security. 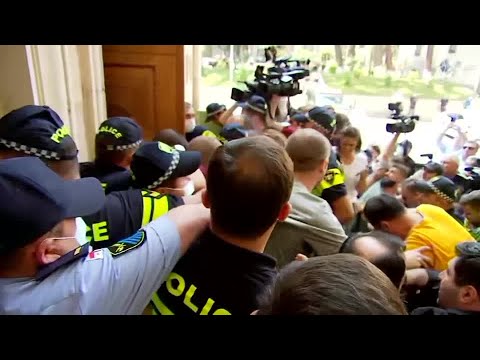 Some did get through, however, and footage showed people pushing and shouting next to a door on the floor of the lower house of parliament. On the floor itself, people could be seen shouting, jostling and shoving one another.

Police have not disclosed the cause of the journalist's death. Nor has TV Pirveli, the channel he worked for.

Police have detained a new suspect in the violence against journalists, the Interior Ministry said on Monday.

Twenty people had now been detained for violence against media, including five held responsible for physical and verbal abuse against TV Pirveli's camera crew, it said.