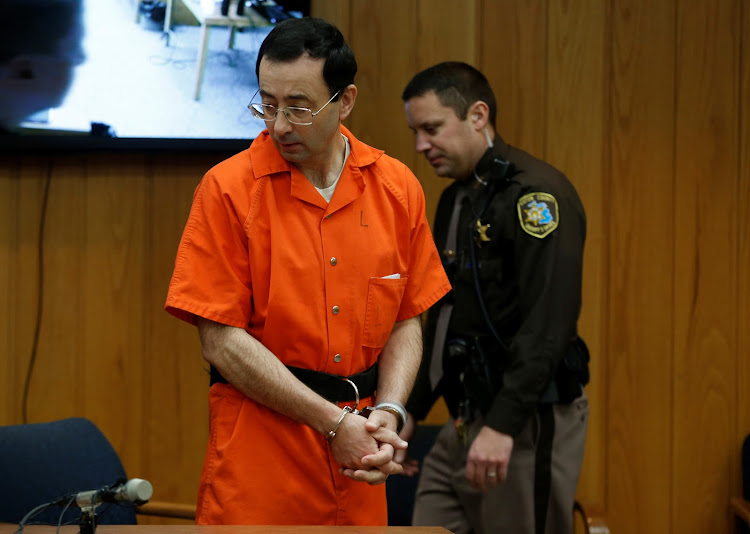 The FBI dragged its feet in probing sexual abuse allegations against disgraced USA Gymnastics doctor Larry Nassar, the US Justice Department's internal watchdog said on Wednesday, and it accused two FBI officials of lying to cover up “numerous and fundamental errors” that allowed the abuse to continue for months.

A scathing 119-page report by Justice Department Inspector General Michael Horowitz said the FBI's field office in Indianapolis “failed to respond to the Nassar allegations with the utmost seriousness and urgency that they deserved and required.”

The probe began in 2015, and the numerous missteps included waiting five weeks to conduct a phone interview with one of the victim athletes that September, the report found, and failing to interview other victims altogether. Also, the field office did not notify the FBI local office in Lansing or state authorities.

“The FBI conducted no investigative activity ... for more than eight months following the September 2015 interview,” Horowitz said. “During that period of time ... Nassar’s sexual assaults continued.”

In a statement, the FBI said the report makes it clear that the behaviour by some of its employees was “inexcusable and a discredit to this organisation.”

“The FBI has taken affirmative steps to ensure and has confirmed that those responsible for the misconduct and breach of trust no longer work (on) FBI matters,” it added.

During the inspector-general's investigation, the report said two FBI officials lied during their interviews to cover up their errors. The report only named one: special agent in charge W. Jay Abbott, who retired in January 2018.

Reuters reports the University of Southern California has reached a record $852m (about R12.8bn) settlement with more than 700 women who accused an ...
News
5 months ago

The inspector-general said Abbott also lied to the FBI and the media when questions from Congress began to surface in 2017 and 2018 about how his office handled the Nassar probe.

The report concluded that Abbott violated the FBI's conflict of interest policy by discussing a possible job with the US Olympic Committee while involved with the Nassar investigation.

Josh Minkler, Barnes & Thornburg partner and legal counsel for Jay Abbott, said in a statement that Abbott “thanks the law enforcement officers and prosecutors who brought Larry Nassar to justice” and “hopes the courageous victims of Nassar’s horrible crime find peace.”

Nassar, who had been the main doctor for Olympic gymnasts, was sentenced in federal court in 2017 to 60 years in prison on charges of possessing child sex abuse material.

The following year, he was also sentenced up to 175 years and up to 125 years, respectively, in two separate Michigan courts for molesting female gymnasts under his care including Olympic gold medallists Aly Raisman and McKayla Maroney.

Horowitz said the Justice Department in September 2020 declined to prosecute Abbott or the supervisory special agent.

The FBI in a statement called Abbott's behaviour “appalling” and said the supervisory special agent remains with the FBI but is no longer a supervisor and is “not working on any more FBI matters.”

The FBI added that its Office of Professional Responsibility is conducting an administrative investigation.

Senator John Cornyn said report showed “catastrophic failures at multiple levels of law enforcement, including federal agents who should’ve taken action and wilfully neglected to do so. This dereliction of duty is reprehensible, and those responsible must be held accountable.”

Nassar abused his victims during medical exams, and claimed he was using a legitimate treatment known as “intravaginal adjustment.” Both of his state court cases drew widespread media coverage, as many victims addressed the court and spoke in heart-wrenching detail about what they endured.

Prosecutors have said Nassar is believed to have abused hundreds of young women. In January, 2018, Olympic champion Simone Biles, one of America's top athletes, revealed that she was among his victims.