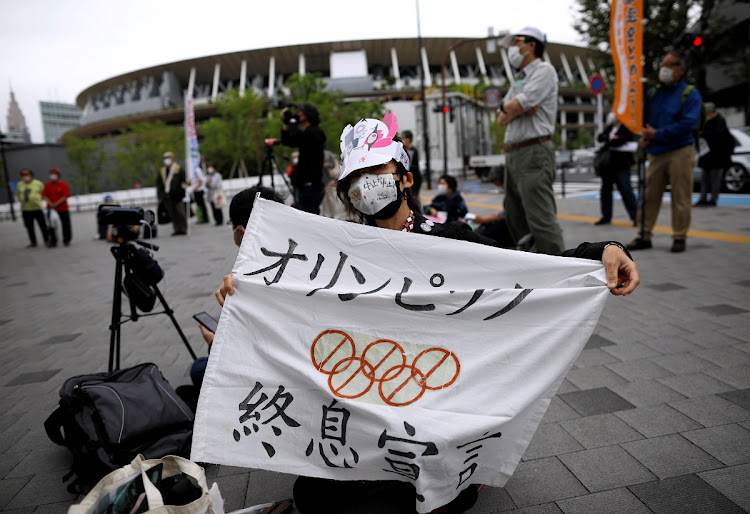 A woman protests against the Olympic Games outside the National Stadium and Japanese Olympic Committee headquarters in Tokyo.
Image: Issei Kato/Reuters

Two-thirds of people in Japan do not believe the country can host a safe and secure Olympics amid a fresh wave of coronavirus infections, according to a survey published by the Asahi newspaper just four days before the opening ceremony in Tokyo.

In the poll, 68% of respondents expressed doubt about the ability of Olympic organisers to control coronavirus infections, with 55% saying they were opposed to the Games going ahead.

Three-quarters of the 1,444 people in the telephone survey said they agreed with a decision to ban spectators from events.

As Covid-19 cases rise in Tokyo, which is under a fourth state of emergency, public concern has grown that hosting an event with tens of thousands of overseas athletes, officials and journalists could accelerate infection rates in Japan's capital and introduce variants that are more infectious or deadlier.

International Olympic Committee President Thomas Bach has said he hopes the Japanese public will warm to the Games once competition begins and as Japanese athletes begin winning medals. The Tokyo Olympics run July 23 through August 8.

Games officials on Sunday reported the first Covid-19 case among competitors in the athletes' village in Tokyo where 11,000 athletes are expected stay during the Games. Since July 2, Tokyo 2020 organisers have reported 58 positive cases among athletes, officials and journalists.

Any major outbreak in the village could wreak havoc on competitions because those either infected or isolating would not be able to compete. Olympic officials and individual event organisers have contingency plans to deal with infections among athletes.

On Sunday six British track and field athletes along with two staff members were forced to isolate after someone on their flight to Japan tested positive for Covid-19.

“Many athletes may have parties or ceremonies before they go to Tokyo where there may be cheering or greeting. So they may also have a risk to get infected in their own countries,” said Koji Wada, a professor at Tokyo’s International University of Health and Welfare and an adviser on the government’s coronavirus response

The latest surge in cases in Tokyo comes after four earlier waves, the deadliest of which was in January. New Covid-19 cases in Tokyo reached 1,410 on Saturday, the most since the start of the year, with new infections exceeding 1,000 for five straight days.

Most of those new cases are among younger people, as Japan has succeeded in getting most of its vulnerable elderly population vaccinated with at least one shot, although only 32% of the overall population has so far received one.

As the start of the Olympics neared, Tokyo on Monday imposed road traffic restrictions, designating reserved lanes for Olympic officials, athletes and journalists travelling between sites.

Transport authorities also hiked toll charges by 1,000 yen ($9.08) for private vehicles using the network of elevated expressways that snake through the city in a bid to reduce traffic during the Games.

Tokyo Olympics organisers yesterday reported the first case of Covid-19 at the athletes' village, with 14 other new cases connected to the Games that ...
Sport
3 months ago

'Who is it for?' Japan captain Maya Yoshida asks in call to lift fan ban

Japan's men's captain Maya Yoshida has questioned the decision to hold the Olympic Games behind closed doors, calling on authorities to reconsider ...
Sport
3 months ago

Covid-19 outbreaks at the Tokyo Olympics

The Tokyo 2020 Olympics, postponed for a year due to the coronavirus pandemic, will be held under unprecedented conditions and tight quarantine rules ...
Sport
3 months ago

A coronavirus cluster at a Japanese hotel where dozens of Brazilian Olympic team members are staying has raised new concern about infections at what ...
Sport
3 months ago