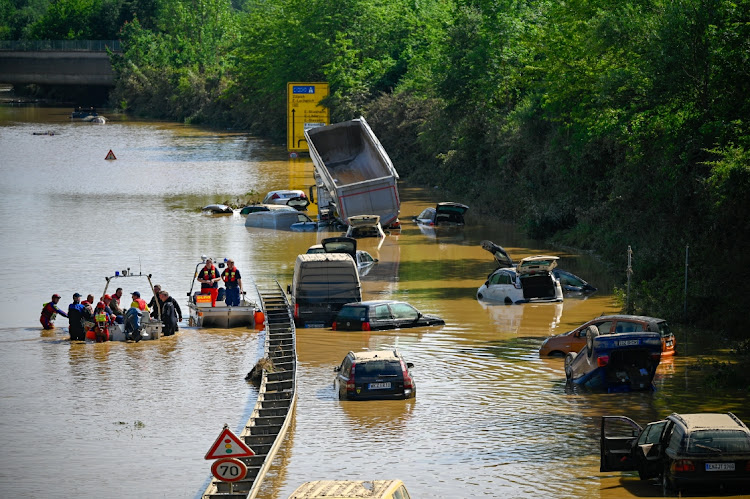 Search and rescue teams are seen on a flooded and damaged part of the highway (A1) on July 17, 2021 in Erftstadt, Germany. The death toll in western Europe rose to 150 after record rainfall this week caused rivers to burst their banks, resulting in widespread devastation in the region.
Image: Sascha Schuermann/Getty Images

An entrepreneur from eastern Germany who raised more than 30,000 euros to help victims of the catastrophic floods that hit western areas last week, arrived in hard-hit Erftstadt on Saturday with machinery to help the cleanup.

The floods, Germany's worst natural disaster in nearly six decades, have killed at least 180 people. Others are still missing and meteorologists have warned of more rain over the weekend.

Sebastian Frenkel, who often visits the western Eifel region of Germany that has been devastated, initiated an online crowdfunding scheme to help. Once he had raised enough money, he bought equipment to help the mammoth clear-up effort before setting off with it from Potsdam, near Berlin.

“There are no roads any more, no bridges. We saw some harsh images in Schuld, in Ahrweiler,” Frenkel told Reuters TV.

He and a team of helpers arrived in the town of Erftstadt, which has piles of rubble and rubbish lining the streets, in trucks with trailers of equipment.

“We are unloading everything now. We have brought construction dryers, screed dryers, we have things for the children in a different car and we hope people will benefit from it.”

Hundreds of volunteers had also responded to a Facebook appeal to help clean out a wet basement at a nursing home. “It is unbelievable how much people are willing to help. How they all came, telling us 'we are going to make it'," said nursing home employee Tanja Dietzen. “I feel like crying. I find it hard to understand.”

Deadly floods that have upended life in both China and Germany have sent a stark reminder that climate change is making weather more extreme across ...
News
2 months ago

Rescue crews are unlikely to find any more survivors among the rubble of villages devastated by floods in western Germany, a senior Federal Agency ...
News
2 months ago

Further flooding was feared in western Germany on Friday as a breach at another dam loomed and the death toll rose to more than 80 in what is ...
News
2 months ago

Heavy rain and once-in-a-generation floods on Wednesday night caused the collapse of six houses in Germany's western state of Rhineland-Palatinate, ...
News
2 months ago

The climate crisis is upon us, and South Africans need to act urgently

Victory in the Rugby World Cup made us all proud to be a winning nation. But SA is also a frontrunner in its development of a climate justice ...
Opinion & Analysis
1 year ago