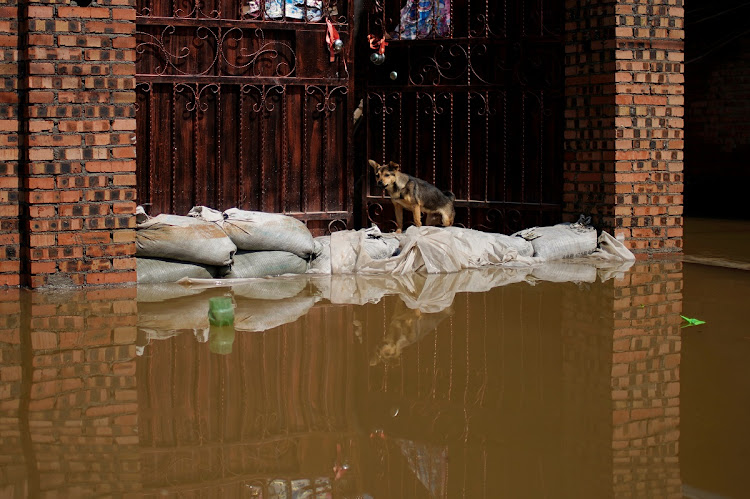 A dog stands on a flood barrier in a village in Xinxiang, Henan province, China.
Image: Aly Song/Reuters

As floods continue to ravage Hebi and other parts of China, a natatorium ruffled some feathers and was fined for advertising swimming lessons.

“Now that Hebi is underwater aren't you going to learn swimming?," read the advertisement according to Global Times.

The advert was posted on the business's WeChat account on July 21 but has since been taken down after a, uh, flood of complaints from residents who found it offensive.

The venue was fined 200,000 yuan (about R453,000) for using the natural disaster for marketing purposes. Hebi is one of the areas affected by downpours which have led to the destruction of infrastructure and deaths of about 69 people, according to Flood List.

According to Reuters, large parts of China's central Henan province experienced heavy rains last week with its capital Zhengzhou hardest-hit after being drenched in the heaviest rain in 1,000 years, according to weather experts.

A video shared by Al Jazeera shows cars submerged underwater and emergency services rescuing residents. It reported damage to infrastructure has resulted in a lack of fresh running water and electricity outages.

Many modes of transport including buses and subways have been cancelled.

Worldwide droughts, wildfires, animal diseases and floods are taking a huge toll on agriculture that we can ill afford
World
4 months ago

An explosion in a German industrial park on Tuesday killed at least two people and injured 31, setting off a fierce blaze that sent a pall of smoke ...
News
4 months ago

The world’s cascade of disasters is not a coincidence

Trends towards a pandemic and social disorder have been brewing for decades. In short, history is repeating itself
Opinion & Analysis
4 months ago