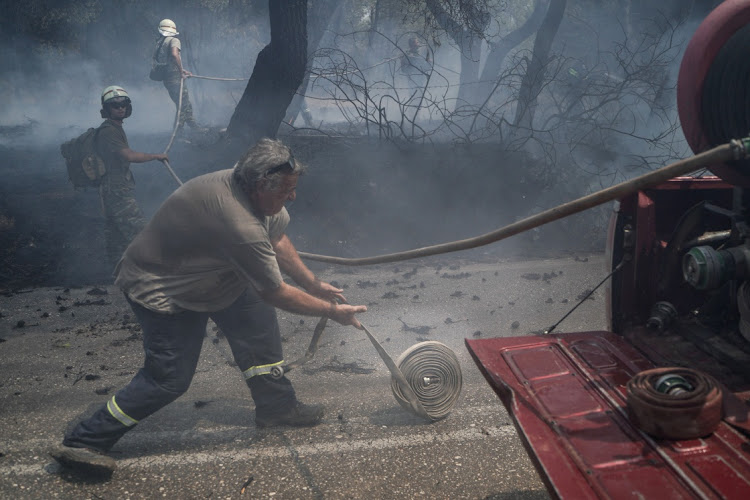 Firefighters from the Hellenic Fire Service work to contain the reignition of a wildfire in Varybobi, near Athens, Greece, on Wednesday, August 4, 2021.
Image: Nick Paleologos/Bloomberg

Greek authorities ordered more evacuations on an island near Athens on Thursday and battled a blaze near the site of the ancient Olympic Games in the western Peloponnese as wildfires burnt for a third day.

Temperatures of more than 40 Celsius (104 Fahrenheit) and strong winds have fanned more than 150 wildfires in different areas of the country in recent days, adding to the conflagrations in Turkey and other areas of the Mediterranean.

“Nightmare with no end,” the Eleftheros Typos newspaper wrote on its front page on Wednesday. “Fires Everywhere,” the left-wing Avgi said.

More than a dozen villages have been evacuated on the island of Evia near Athens since Tuesday, with some 85 people rescued by boat from a beach, as the wildfire scorched pine trees and sent clouds of ash and smoke into the air. Miles away, skies in Athens were darkened.

Authorities cleared more people on Evia on Thursday as church bells sounded a warning. More than 170 firefighters with 52 engines and six aircraft were operating in the area.

More villages were evacuated in the Peloponnese region on Thursday as a blaze raged near the archaeological games site in Ancient Olympia, but its treasures were out of danger, authorities said.

The site, where the Olympic flame begins its journey to the city hosting the modern Olympics, is one of Greece's most popular tourist attractions.

Local media showed farm animals among swings in a children's playground, moved there to save them from the flames.

Reinforcements arrived from Cyprus and France and two aircraft from Sweden were expected later on Thursday.

Fires that had threatened the northern outskirts of Athens on Tuesday were under control, with firefighters and aircraft still working there.

The opposition Syriza and KINAL parties have accused the government of being slow to respond to Tuesday's blaze, while winds were still low and conditions favourable.

Children were evacuated from a Greek summer camp and residents fled their homes on Tuesday as a wildfire raged uncontrolled on the outskirts of ...
News
10 months ago