Image: Milos Bicanski/Getty Images Firefighters try to put out a fire as flames spread over a highway during a wildfire on August 5 2021 in northern Athens, Greece.

Hundreds of people were evacuated by boat from an island near Athens as Greece braced for a fourth day of wildfires on Friday with emergency services forecasting strong winds and searing temperatures.

Coastguard vessels assisted by tourist boats have picked up 631 people since late Thursday from three beaches on the island of Evia, where the flames have burnt through a vast area of pine forest since Tuesday and reached the sea.

They were all moved to safety and sea patrols are continuing in case of emergency, a coastguard official said. 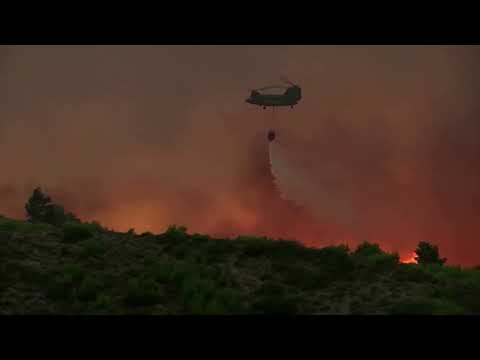 The skies of Athens were again clouded by thick smoke from wildfires on the northern outskirts of the city, which burst back into life on Thursday after dying down earlier in the week.

A number of suburbs have been evacuated as the fire burnt around the main highway linking Athens to northern Greece and hundreds of firefighters with water-bombing aircraft were trying to prevent the flames reaching the nearby town of Marathon.

Temperatures have been over 40 °C (107 Fahrenheit) all week and no let up was expected on Friday with gale force winds expected to spread the flames further.

So far, at least nine people have been taken to hospital with varying degrees of injury, including two volunteer firefighters treated for burns in intensive care units in Athens, health officials said.

With neighbouring Turkey also battling huge wildfires for more than a week, Prime Minister Kyriakos Mitsotakis said on Thursday Greece needed to strengthen its preparedness for severe weather brought on by climate change.