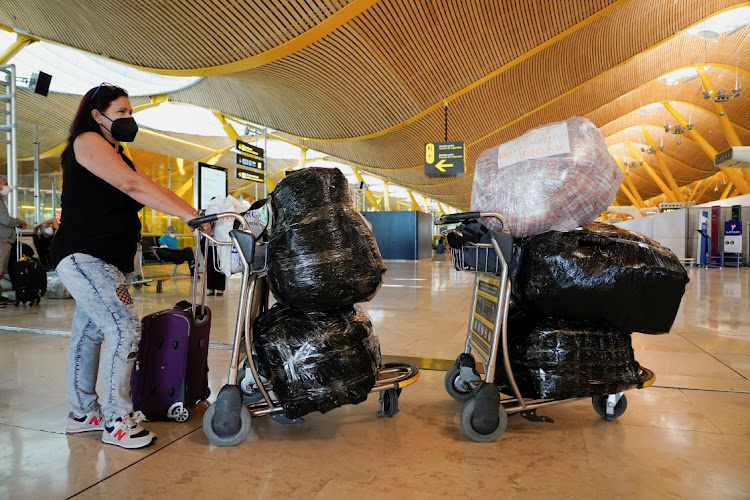 Colarte is part of a growing international network of volunteers from the Cuban diaspora who have been transporting tonnes of aid to the Caribbean island in recent months.

“Everyone has contributed a little bit of themselves, a bit of their love,” said Colarte, 52, before boarding the plane to Havana with 100 kilograms of supplies. “I'm so happy to bring medicine to my people who really need it.”

Built under the late revolutionary leader Fidel Castro, Cuba's universal public healthcare system is one of his revolution's most treasured achievements but a deep economic crisis has seen shortages of medicines and other basic goods.

The government largely blames US sanctions while its critics blame the inefficient state-run economy. Last month the shortages, along with power outages and a lack of civil liberties, prompted rare mass street protests.

One of the measures the Cuban government took in response to the unrest was to allow travellers to bring in medicine, food and sanitary products without paying import duties. In the two weeks following that move, travellers brought in 112 tonnes of such goods via Havana international airport, Cuban customs said.

Volunteers welcomed that move but said its impact was limited given the few flights operating to Cuba after the government restricted them due to the Covid-19 outbreak.

“The biggest diaspora community is in Florida but we went from 50 flights per week from the US to Cuba to three,” said Florida-based volunteer Enrique Guzman Karell.

Those flights were booked up until next year, he said, meaning volunteers had to fly via Madrid, from where there were more flights — an “absurd, very expensive trip to deliver humanitarian aid”.

At a church in Madrid, boxes piled high as volunteers sorted shipments donated by hospitals, pharmacies and individuals and bound for various Cuban provinces.

“People send requests for medicine via online messenger, saying 'I've got a relative who needs this or that' and they send us the prescription,” said Massiel Rubio Hernandez, 37, an editor and organiser of the Madrid-based Ayuda Humanitaria Cubana (Cuban Humanitarian Help), one of the first organisations to co-ordinate relief.

Over the past three weeks, the organisation has sent a tonne of medicines and other aid that is then distributed by other volunteers.

“We mainly send antibiotics and drugs which combat Covid-19 because there is just nothing there at the moment,” said Hilda Landrove, a Cuban student who is part of another volunteer group based in Mexico City.

Cuba is currently suffering one of the worst Covid-19 outbreaks in the world, with confirmed cases over the past week ten times the global average.

“The doctors have prescribed my grandmother Azithromycin but there isn't any at the state pharmacies,” said one Havana resident who declined to be named for fear of reprisals.

He said he couldn't afford current black market prices he had found online — of 1,200 pesos (about $50) per antibiotics treatment — on his monthly state salary of 3,200 pesos.

“I can't let her die because of this shortage,” he said.

Even before the Covid-19 surge, Cubans had taken to queuing outside state pharmacies from before dawn to be at the front of the line when scarce medicine supplies arrived.

Some barter for medicine on social media or use herbal remedies instead as preventable diseases such as scabies spread due to a lack of adequate treatment.

Volunteers like Guzman Karell are calling on Cuba to allow more flights, especially from the US, while they say the US government should once again allow flights to cities outside Havana.

“It's a drop in the ocean, given the chronic shortages,” said Guzman Karell, “but at least it's something.”

Cuba, which kept coronavirus infections low last year, now has the highest rate of contagion per capita in Latin America. That has strained its ...
News
10 months ago

One step forward, hundreds of kilometres back for Cuban refugee

Leonardo Herrera was elated when he saw the US coastline from a migrant boat. Then his dreams were shattered
World
10 months ago

Cuba announced on Wednesday it was temporarily lifting restrictions on the amount of food and medicine travelers could bring into the country in an ...
News
10 months ago

‘Neo-liberal’ citizens, hard-hit by the Covid-19 pandemic, want an ‘end to dictatorship in the country’
World
10 months ago

Chanting "freedom" and calling for President Miguel Diaz-Canel to step down, thousands of Cubans joined street protests from Havana to Santiago on ...
News
10 months ago