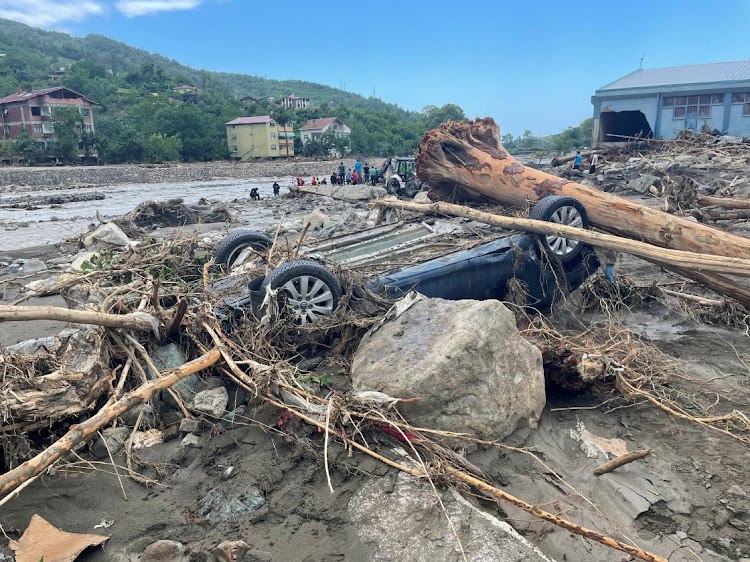 The wreckage of a vehicle is seen amid debris after flash floods swept through towns in the Turkish Black Sea region, in the town of Bozkurt, in Kastamonu province, Turkey, August 14, 2021.
Image: REUTERS/Mehmet Emin Caliskan

Families of those missing after Turkey's worst floods in years anxiously watched rescue teams search buildings on Saturday, fearing the death toll from the raging torrents could rise further.

At least 40 people have died from the floods in the northern Black Sea region, the second natural disaster to strike the country this month.

Thirty-four people died as a result of floods in the Kastamonu district which includes Bozkurt, and another six people died in Sinop, the Disaster and Emergency Management Directorate (AFAD) said.

In one collapsed building along the banks of the swollen river, 10 people were still believed buried. The rapid floodwaters appeared to have swept away the foundations of several other apartment blocks.

Relatives of the missing, desperate for news, were nearby.

“This is unprecedented. There is no power. The mobile phones were dead. There was no reception. You couldn't receive news from anyone,” said Ilyas Kalabalik, a 42-year-old resident.

“We had no idea whether the water was rising or not, whether it flooded the building or not. We were just waiting, like this. Our wives and children were panicked. Once sun came up in the morning, we saw police officers. They took us from the building and hurled us into a gas station.”

Kalabalik was surrounded by residents who were asking each other whether anyone had any news about missing people.

The floods brought chaos to northern provinces just as authorities were declaring wildfires that raged through southern coastal regions for two weeks had been brought under control.

About 45cm (18 inches) of rain fell in less than three days in one village near Bozkurt.

Torrents of water tossed dozens of cars and heaps of debris along streets, destroyed bridges, closed roads and cut off electricity to hundreds of villages.

The small town of Bozkurt lies in a valley along the banks of the Ezine river in Kastamonu province, 2.5km (1.6 miles) from the Black Sea.