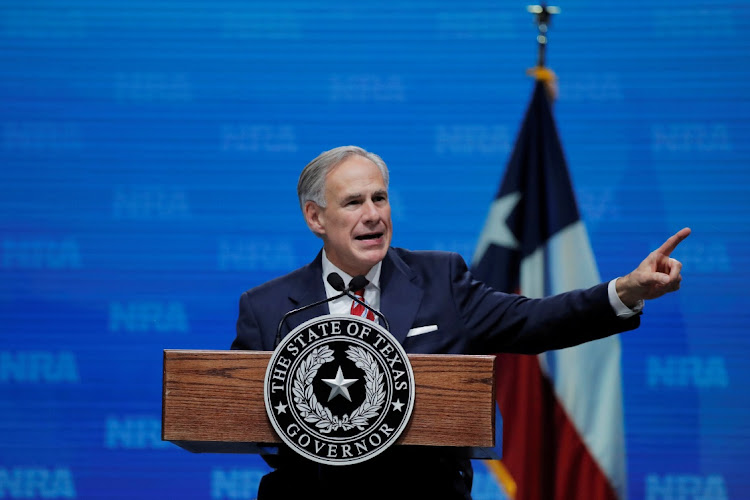 Texas Governor Greg Abbott, whose state is engulfed in a fourth Covid-19 surge, tested positive for Covid-19 on Tuesday but so far has no symptoms of the illness, his office said.

Abbott, a Republican who is locked in battle with some local leaders over his ban on mask mandates in schools, is isolating, his office said. The governor, who is fully vaccinated, is also receiving a monoclonal antibody treatment.

“I test myself everyday, and today is the first day that I tested positive,” Abbott said in a video posted on Twitter. “Also want you to know that I have received the Covid-19 vaccine, and that may be one reason I'm really not feeling any symptoms right now.”

On Monday night Abbott spoke before a crowd of hundreds at an indoor Republican Party event in suburban Dallas where few wore masks. On Tuesday, the governor tweeted a photo of himself meeting with guitarist Jimmie Vaughan, brother of the legendary Texas strummer Stevie Ray Vaughan.

“Everyone that the governor has been in close contact with today has been notified,” said Mark Miner, Abbott's communications director. “Texas First Lady Cecilia Abbott tested negative.”

The statement did not give any indication as to when the governor contracted the virus.

The news of Abbott's infection came on the same day that officials in Houston said they would pay $100 to anybody receiving their first dose of a Covid-19 vaccine and as hospitals in the area are expected this week to surpass records for the number of Covid-19 patients in their care.

Vaccines protect people from serious illness, hospitalisation and death after contracting the coronavirus, but vaccinated people can still be infected and pass it on.

Harris County Judge Lina Hidalgo, the top elected official in the county that encompasses Houston, implored residents to take advantage of the $100 incentive, which she said would last at least until August 31.

“We have got to step up, enough is enough!” Hidalgo said at a press conference.

Hidalgo said the Harris County program had $2.3 million and was being funded by money from the American Rescue Plan. It comes after the administration of President Joe Biden in July asked local governments to make such payments to boost lagging vaccination rates across the country.

Dr. Esmaeil Porsa, CEO of the Harris Health hospital system, appeared alongside Hidalgo on Tuesday and said his facilities now had more Covid-19 patients than ever.

“This is the worst surge that we have faced as a community,” he said. “I am begging you — do the right thing. Get yourself vaccinated.”

The Texas Department of State Health Services said that earlier this month it requested five mortuary trailers from the Federal Emergency Management Agency in case hospitals need support in storing Covid-19 victims' bodies. So far, none have requested the use of the trailers, it said in an email.

The highly infectious Delta variant continues to rampage across Texas and other states with low levels of vaccinations.

The US has registered more than 37 million cases of Covid-19 since the pandemic began. The rate at which new cases are being added is faster than ever, according to a Reuters tally. It took just 18 days through Monday for 2 million new cases to be reported — the quickest such jump on record.

Florida has its highest level of Covid-19 patients in hospitals, with 16,832 patients, according to data from the US department of health and Human Services.

The spread of the Delta variant is already disrupting the new school year in some of the hardest-hit states.

In Tampa, Florida, nearly 5,600 students and over 300 employees of a single school district were in isolation or quarantine on Tuesday because of catching or being exposed to Covid-19. The Hillsborough County School Board said it would hold an emergency school board meeting on Wednesday to determine the best way to mitigate the spread of the virus.

Florida Governor Ron DeSantis, a Republican, has banned mask mandates in schools, though some superintendents have bucked his order.

In Louisiana, where Democratic Governor John Bel Edwards has ordered that masks be used indoors statewide, including in schools, more than 3,000 students in New Orleans were isolated or quarantining, the Orleans Parish school district reported.

Children hospitalised with Covid-19 in US hits record number

The number of children hospitalized with Covid-19 in the United States hit a record high of just over 1,900 on Saturday, as hospitals across the ...
News
5 months ago

By spurning jabs, Americans push their healthcare system to the brink

The country is running out of beds and medical staff, with experts imploring people to get vaccinated
World
5 months ago

Two more members of a Texas Democratic Party delegation of lawmakers who fled their state delaying passage of what they say are restrictive voting ...
News
6 months ago