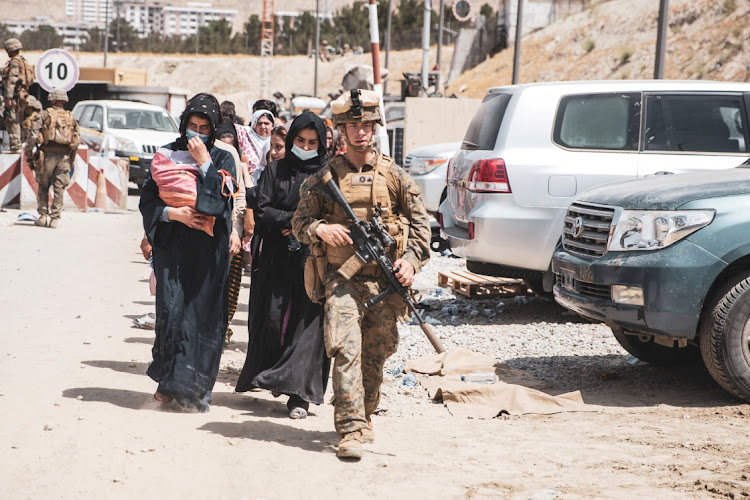 Irish media has reported that LGBT+ people will also be among its 150 Afghan refugees brought to the country.
Image: Marine Corps/Handout via REUTERS THIS IMAGE HAS BEEN SUPPLIED BY A THIRD PARTY. TPX IMAGES OF THE DAY

It was never easy being gay or transgender in Afghanistan. Now it could be deadly, according to LGBT+ Afghans, whose fear of violence under the Taliban is driving a frantic bid to escape.

But how any evacuation might work is another matter, with scant practical support coming from overseas and even less hope that Islamist militants will let them into the airport.

"If I find a visa and a country gives me permission to leave, of course I will risk everything to get out," said one gay Afghan student, whose name was withheld for his protection.

"Any country, but not here. Living here means nothing for us."

The odds are stacked against an escape as the 21-year-old hides indoors, paralysed by fear of what might happen on the street, with few exit routes open amid chaotic airport scenes.

Nor is it clear where LGBT+ Afghans might be welcome to set up home or whether sexuality or gender identity are criteria for automatic asylum in many countries around the world.

Canada has pledged to resettle 20,000 Afghans, explicitly including LGBT+ people in its commitment.

In offering such clear assurance, Canada is an outlier.

Irish media has reported that LGBT+ people will also be among its 150 Afghan refugees brought to the country. Ireland's foreign ministry did not respond to a request for comment.

But in other Western democracies, including the United States and Europe, there was no such clarity.

On Monday, the day after Kabul fell, US President Joe Biden wrote a memo granting $500m for "unexpected urgent refugee and migration needs of refugees, victims of conflict, and other persons at risk" in the tumult.

US State Department spokesperson Ned Price told reporters on Tuesday that the United States would "bring to safety... vulnerable Afghans" without specifying who. Asked if this covered LGBT+ Afghans, the State Department declined comment.

Britain says it will welcome up to 5,000 Afghans under year one of a resettlement programme that will prioritise women, girls and religious and other minorities.

Again, it made no mention of LGBT+ Afghans and did not respond to a Thomson Reuters Foundation request for comment.

Many European leaders are wary of accepting any migrants - of any type - and some countries, including Australia, have explicitly rejected an Afghan influx.

Turkey is bolstering its border walls with Iran, which neighbours Afghanistan, expressly to keep out Afghan migrants.

"Public attitudes...towards LGBTQI+ people are extremely negative, which leads members of the LGBTQ+ community to keep their gender identity and sexual orientation a secret in fear of harassment, intimidation, persecution, and death," it said.

"Now, with the return of the Taliban, there is understandable fear that the situation will worsen."

US novelist Nemat Sedat, a gay Afghan-American who left his homeland aged 5, then taught at an Afghan university from 2012 to 2013, told the Thomson Reuters Foundation he had been contacted by more than 100 LGBT+ Afghans desperate to flee.

"People are messaging me, telling me 'What can we do? We're going to get exterminated. The Taliban are going to weed us out and kill us,'" Sedat said in a video call.

Sedat said he was working with an American based in Kabul and lobbying his congressman to try and arrange a flight out.

Contacted over WhatsApp, the American confirmed he was at Kabul airport, but said the situation was "really bad" and he was unsure even how to get LGBT+ people safely through the city.

Chaos has swamped the airport, with reports of stampedes, Taliban fighters turning back Afghans with travel documents and women throwing their babies over the wall to U.S. soldiers.

Since Sunday, 12 people have been killed in and around the airport, according to NATO and Taliban officials. (Reporting by Rachel Savage @rachelmsavage; Editing by Lyndsay Griffiths.

The article was first published by the charitable arm of Thomson Reuters, that covers the lives of people around the world who struggle to live freely or fairly.

A total of 12 people have been killed in and around the airport in the Afghan capital, Kabul, Taliban and Nato officials said, since the Taliban ...
News
5 months ago

At least three people were killed in anti-Taliban protests in the Afghan city of Jalalabad on Wednesday, witnesses said, as the militant group moved ...
News
5 months ago

Canada plans to resume military flights to Afghanistan to evacuate civilians as the US regains control of the Kabul airport, the Canadian Armed ...
News
5 months ago