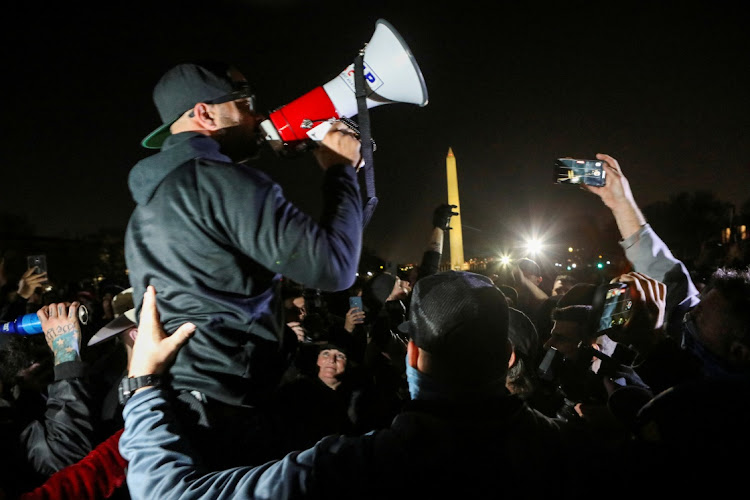 Proud Boys Chairman Enrique Tarrio addresses supporters and other members of the far-right Proud Boys during a march near the Washington Monument the night before rallies to protest the US presidential election results, in Washington, DC, US, December 11, 2020.
Image: REUTERS/Jim Urquhart/File Photo

A Proud Boys supporter pleaded guilty on Monday to making social media threats tied to the January 6 riot at the US Capitol, including a threat to kill an incoming US senator.

The defendant, Eduard Florea, also admitted to storing a large collection of ammunition at his home in the New York City borough of Queens.

Florea, 41, a software engineer and father of two, entered his plea at a remote hearing before Chief US Magistrate Judge Cheryl Pollak in federal court in Brooklyn.

Prosecutors said Florea used the moniker “LoneWolfWar” on Parler, a social media platform used by conservatives, to make threats before and during the riot, where supporters of Republican then-President Donald Trump tried to stop Congress from certifying Democrat Joe Biden's presidential election win.

Florea, who did not attend the riot, allegedly referred to current Democratic Senator Raphael Warnock of Georgia as a “dead” man.

Prosecutors said he also wrote while the Capitol was under siege: “I am awaiting my orders ... armed and ready to deploy” and “It's time to unleash some violence.”

Federal guidelines recommend that Florea spend 15 to 21 months in prison, but prosecutors intend to seek a longer term at his sentencing, scheduled Nov. 29. The defendant has been detained in a Brooklyn jail since January.

Florea's lawyer did not immediately respond to a request for comment. A remote public connection to Monday's hearing failed before Florea entered his plea.

The Proud Boys are a far-right group that has supported violence and endorsed Trump.

Federal prosecutors in Washington said this month they were in preliminary talks with several Proud Boys defendants on possible pleas.

More than 570 people have been charged in connection with the riot. Trump has falsely claimed that Biden's win resulted from widespread voting fraud.

A Florida man on Wednesday became the second person so far to plead guilty for his role in storming the US Capitol on January 6, after he entered the ...
News
1 year ago

Two US Capitol Police officers have filed a lawsuit against former President Donald Trump, saying he incited the deadly January 6 insurrection and ...
News
1 year ago