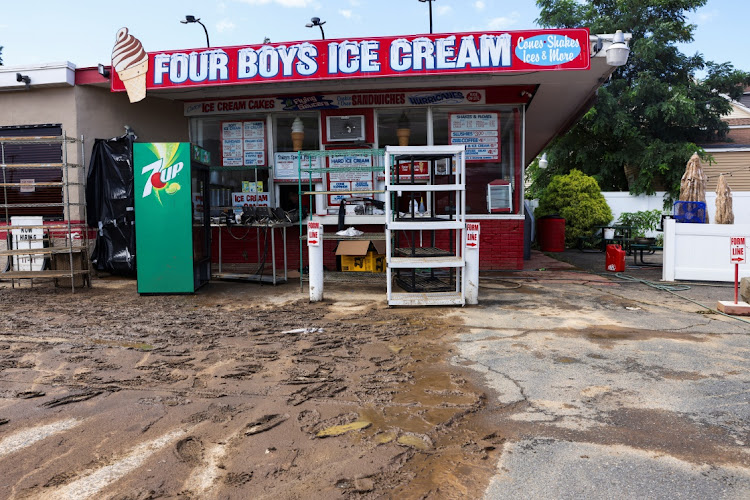 Storm Henri, downgraded to a tropical depression, threatened to trigger flash floods in the US Northeast on Monday after drenching the region over the weekend.

Predicted to be the first major hurricane to make landfall in the region in decades, Henri weakened sooner than expected, sparing residents severe wind damage when it made landfall as a tropical storm at about 12:15pm on Sunday near Westerly, Rhode Island.

The storm dropped more than eight inches of rain on parts of central New Jersey and New York City's Brooklyn borough between Saturday and Sunday night, according to data collected by the Maryland-based Weather Prediction Center. It also caused dangerous flooding and spurred evacuations in New Jersey.

While Henri's winds were less destructive than Hurricane Sandy's in 2012, its follows an unusually wet spring and summer, which will mean worse flooding inland, especially if the storm lingers instead of moving offshore overnight and Tuesday, Steven Bowen, MD and global head of catastrophe insight at insurer Aon PLC told Reuters.

5 pm Monday...The center of the remnants of Henri are moving back across Connecticut - centered 50 mi west-southwest of Hartford CT moving to the ENE at 9 mph. Here is a radar view of the last 50 hours of Henri from 2 pm Saturday Aug 21st to 4:16 pm Monday August 23rd. pic.twitter.com/0IEEYtFvYp

Since homeowners insurance typically excludes flooding, people and businesses will bear the brunt of costs unless they had National Flood Insurance Program protection, he added.

“Climate change is not necessarily the direct cause” of the extreme weather pattern, Bowen said. “But it certainly has its fingerprints all over it.”

In Helmetta, New Jersey, the department of public works was starting to clear the roadways on Monday after floodwaters engulfed entire residential blocks over the weekend, according to the town office of emergency management's Facebook page.

More than 125 residents had been forced to evacuate over the weekend, Helmetta Borough Administrator Matt Crane said in a telephone interview. Those residents were still under mandatory evacuation orders on Monday as rescue workers assessed the structural integrity of their homes, the Facebook post said.

The mayor of Helmetta posted images showing the streets of a residential neighbourhood submerged in brown water up to the front porches of houses, and first responders travelling down the streets in boats and wading in thigh-deep water.

“Our goal is to rectify the situation as promptly and safely as possible with an emphasis on getting our displaced families back to their homes,” Helmetta Mayor Chris Slavicek wrote on Facebook.

New Jersey Governor Phil Murphy was due to visit Monroe Township in central New Jersey on Monday, NJ.com reported. Monroe Township's emergency management office opened a shelter over the weekend for residents whose homes were flooded or who were without power.

Tropical storm Grace dumped heavy rain on Mexico's Caribbean coast but appeared to have spared tourist resorts serious damage as it moved across the ...
News
2 months ago

Hurricane Grace barreled into the oil-producing Mexican state of Veracruz with howling winds on Saturday, threatening coastal areas with flooding ...
News
2 months ago