US, China accuse each other of 'bullying' nations 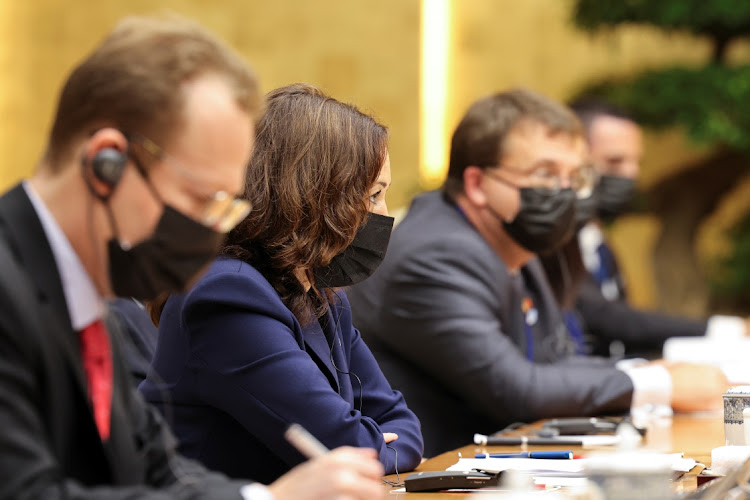 US Vice President Kamala Harris looks on during a meeting with Vietnam's Prime Minister Pham Minh Chinh (not pictured) at the Office of Government, in Hanoi, Vietnam, August, 25, 2021.
Image: REUTERS/Evelyn Hockstein/Pool

US vice-president Kamala Harris on Wednesday again charged China with bullying its Southeast Asian neighbours, the second time in two days she has attacked Beijing during a regional visit aimed at countering China's growing influence.

Earlier on Wednesday, Chinese state media accused Harris of seeking to drive a wedge between China and Southeast Asian nations with comments in Singapore that Beijing used coercion and intimidation to back its unlawful South China Sea claims.

Speaking in Hanoi on Wednesday, Harris said there was a need to increase pressure on Beijing over its maritime claims.

“We need to find ways to pressure, raise the pressure...on Beijing to abide by the United Nations Convention on the Law of the Sea, and to challenge, its bullying and excessive maritime claims,” said Harris during a meeting with Vietnamese President Nguyen Xuan Phuc.

China, Vietnam, Brunei, Malaysia, the Philippines and Taiwan, lay claim to parts of the South China Sea, which is crossed by vital shipping lanes and contains gas fields and rich fishing grounds.

China has established military outposts on artificial islands in the South China Sea and objects to foreign warships sailing through what it claims is its sovereign waters.

The US Navy regularly conducts “freedom of navigation” operations through the disputed waters, which China objects to, saying they do not help promote peace or stability.

In 2016, the Hague-based Permanent Court of Arbitration ruled against China's claim, but Beijing has rejected the ruling.

“While pointing a finger at China and accusing it of 'coercion' and 'intimidation', Harris wilfully ignored her own hypocrisy in attempting to coerce and intimidate regional countries to join Washington in its scheme to contain China,” the state run China Daily said in an editorial responding to Harris's comments in Singapore.

Harris's Singapore speech was a baseless attack on China, the editorial said. “It seems that the US' only commitment to Southeast Asia is its dedicated efforts to drive a wedge between the Southeast Asian nations and China,” it added.

The US administration has called rivalry with China “the biggest geopolitical test” of the century and Southeast Asia has seen a series of high-profile visits by top administration officials, including Secretary of Defense Lloyd Austin, who visited Hanoi in late July.

Harris's arrival in Hanoi was delayed on Tuesday after the US Embassy in Vietnam said it had detected an “anomalous health incident”, potentially related to the mysterious Havana Syndrome.

Afghanistan has captured the world’s attention since the Taliban blitzed through the country, reclaiming cities and towns as they moved until they eventually reclaimed the capital Kabul. We take a look at a visual timeline of the events.

During the delay, Vietnam's Prime Minister Pham Minh Chinh and China's ambassador to Vietnam held a previously unannounced meeting, during which Chinh said Vietnam does not take sides in foreign policy. The Chinese ambassador promised a donation of 2 million Covid-19 vaccines during the meeting.

China is Vietnam's largest trading partner and Vietnam is heavily reliant on materials and equipment from China for its manufacturing activities.

Their ruling Communist Parties maintain close ties, but Vietnam and China have been embroiled in a long-standing dispute over maritime claims in the South China Sea, known as the East Sea in Vietnam.

The tensions have propelled Vietnam into being one of the most vocal opponents of Beijing's claims in the disputed waterway and Hanoi has received US military hardware, including coastguard cutters.

Ties between Hanoi and Washington have grown closer more than four decades after the Vietnam War ended in 1975, though Washington has said there are limits to the relationship until Hanoi makes progress on human rights.

Analysts say Vietnam wants to upgrade its diplomatic relationship with the US to a “strategic partnership” but is concerned such a move would anger Beijing.

Things have truly come full circle for the US. The bully, if you like, got a bloody nose. The US has been humiliated, and its enemies are loving it, ...
Opinion & Analysis
11 months ago

Vice-president Kamala Harris, in a visit to Singapore and Vietnam next week that aims to counter China's growing influence, will have to contend with ...
News
11 months ago