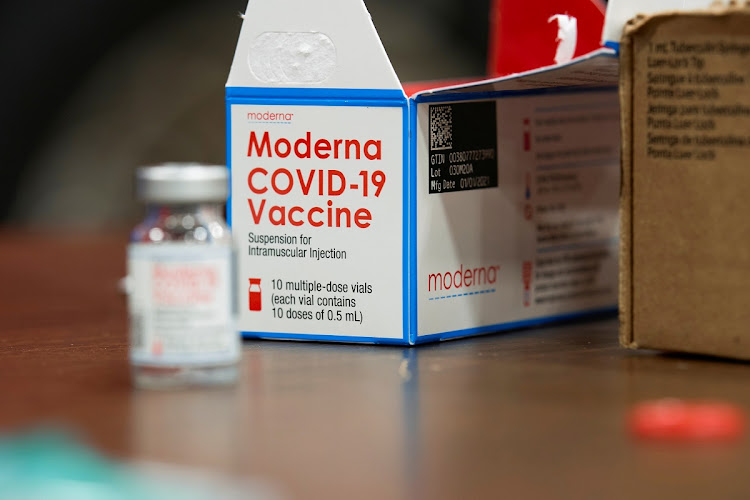 “Moderna confirms having been notified of cases of particulate matter being seen in drug product vials of its Covid-19 vaccine,” Moderna said in a statement.
Image: Cooper Neill/Reuters/File photo

Moderna Inc said on Wednesday it has withheld supply of about 1.63 million doses of its Covid-19 vaccine in Japan after a report of contamination of vials with particulate matter, which it suspects involves a production line in Spain.

Though Moderna said no safety or efficacy issues had been identified, the suspension is a fresh setback for the firm, whose partners had production delays last month that disrupted supplies to countries, including South Korea.

That has prompted some Japanese companies to cancel worker vaccinations planned for Thursday, as most of doses in question have been supplied to mass vaccination sites and workplaces in Japan.

“Moderna confirms having been notified of cases of particulate matter being seen in drug product vials of its Covid-19 vaccine,” Moderna said in a statement.

“The company is investigating the reports and remains committed to working expeditiously with its partner, Takeda, and regulators to address this,” it added, referring to Japan's Takeda Pharmaceutical.

It said the contamination could be due to a manufacturing issue in one of the production lines at its contract manufacturing site in Spain.

It was not immediately clear whether the issue affected supplies to other countries.

Moderna did not immediately respond to a Reuters' request for comment. Spain's Rovi, which bottles or “fills and finishes” Moderna vaccines for markets other than the US, was not immediately available to comment.

The vaccine lot with complaints had 565,400 doses and Moderna said that “out of an abundance of caution” it had put the lot on hold and two adjacent ones.

Takeda said it conducted an emergency examination after particulate matter was found in a lot of vaccine vials at an inoculation site in Japan.

Japan's health ministry has decided to withdraw some doses as a precaution after consultation with Takeda but it said it would strive to minimise the affect of the withdrawal on its inoculation plans.

Chief cabinet secretary Katsunobu Kato said there had been no cases reported of health issues related to contaminated shots administrated.

Between August 6 and Aug. 20, vaccines from the lot in question were used at a mass public vaccination centre in Osaka, according to the defence ministry, which operates the centre. The ministry did not said how many people were affected.

Japan Airlines said it had cancelled some Covid-19 vaccinations for its employees on Thursday after receiving Moderna vaccines with particulate matter.

Another Japanese carrier, ANA, also held off on its vaccinations on Thursday according to Kyodo news agency.

Prime Minister Yoshihide Suga said on Wednesday that about 60% of the public will be fully vaccinated by end-September and that the country had enough vaccines to provide booster doses if such a decision is taken.

As the variant takes hold of the vaxxed, scientists are pushing for booster shots, saying they will ‘definitely help’
World
11 months ago

The FDA approved the two-dose vaccine for use in people over the age of 16.
News
11 months ago

Some vaccines lost effectiveness after three months, which is likely to lead to calls for booster shots
World
11 months ago

Forget what you’ve read and herd ... immunity is still a long way off

Delta variant is moving the goalposts for ending the pandemic, Covid may be present for a century - or longer
World
11 months ago

US FDA authorises Covid-19 vaccine boosters for the immunocompromised

The US Food and Drug Administration on Thursday authorised a booster dose of Covid-19 vaccines from Pfizer Inc and Moderna Inc for people with ...
News
1 year ago