Louisianans scramble to find fuel for generators after Ida 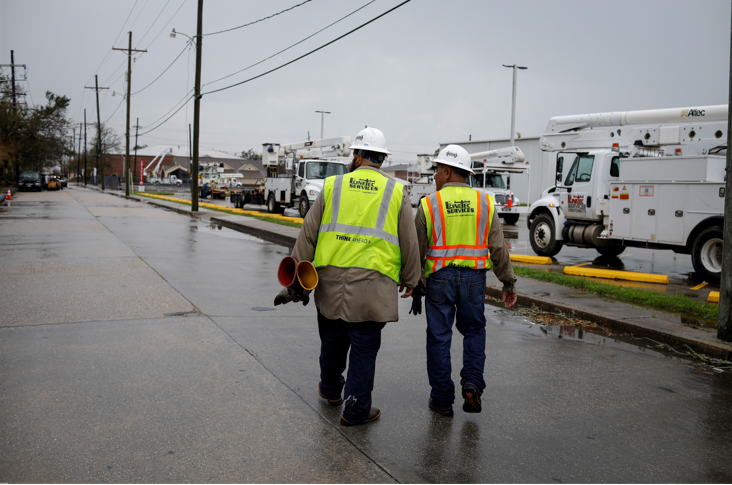 Power restoration workers inspect the area surrounding an affected hospital after Hurricane Ida made landfall in Louisiana, in Houma, Louisiana, US, on September 1 2021.
Image: REUTERS/Marco Bello

Storm-battered Louisiana residents and area businesses, who have endured almost a week without electricity, are having trouble finding generators or fuel to power them, making it difficult for residents to cool their homes after Hurricane Ida.

Ida's severe winds knocked out power to more than one million homes and businesses. Unlike other recent fuel crunches, such as the ransomware attack that forced the Colonial Pipeline to shut in May, supply is not the only problem. Many gas stations are without power, keeping them from operating, and making it harder for residents to fill generators.

Residents are not the only ones scrambling.

Nearly a dozen grain export terminals dotted along the Mississippi River from Baton Rouge to the Gulf of Mexico have been without power all week, disrupting export shipments from the country's biggest grain exporting port.

More than two-thirds of stations were without fuel in Baton Rouge and New Orleans as of Friday, the most populous cities in the state, according to GasBuddy.com.

After Hurricane Katrina in 2005, some Louisianans invested in natural gas generators, and they have been able to keep the lights on. Others have not been as fortunate.

In New Orleans, Aaron Lowe, 49, lined up on Thursday at a fuel station to wait for gasoline for the third straight day. He said he and many others braced for the storm by getting a generator, but finding gasoline has been difficult.

"I had to wait about 40 minutes (today)," said Lowe, a construction worker. "I was waiting between two and four hours in the last couple of days."

Lowe was at a Shell station on S. Claiborne Avenue in New Orleans, which was running on generators, said Abdul Saleh, the station manager.

Station outages have not been a problem of supply, said Patrick De Haan, head of petroleum analysis at GasBuddy, even as some oil producers and refiners in the region struggle to get up and running.

"There's a lot of stations that have a lot of gasoline but can't move it because they don't have power," he said.

About 860,000 homes and businesses in the state still lacked power as of Friday.

Retail gasoline prices in New Orleans have risen by 6 cents in the last week, to $2.868 for a gallon of regular gasoline, American Automobile Association data showed.

Some are finding it hard to even get their hands on a generator.

In Baton Rouge, Austin Corona tried from Tuesday to Thursday to find a generator, before giving up. The heat has been so unbearable that Corona, 55, slept in his car in the driveway this week. Generators have been humming all around his neighborhood, he said.

Some hardware stores have started to regain power in the region, he said on Friday. After one store reopened earlier this week, Corona beelined to get a generator but they had sold out of them in under an hour.

Strain said the company may have been told to prepare for a prolonged power outage. "They're going to have to buy them from whatever company has those big enough and then get them down here. Then the big issue will be fueling them," he said.

At least five flash-flood emergencies were issued on Wednesday evening by the National Weather Service, stretching from just west of Philadelphia ...
News
2 months ago

US President Joe Biden held a call with Secretary of Energy Jennifer Granholm and the CEOs of two of the largest utilities in the Gulf Coast - Leo ...
News
2 months ago