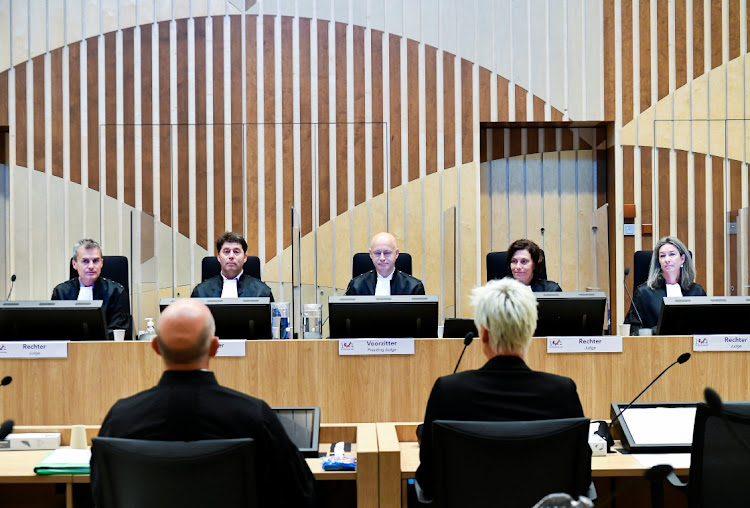 A general view of the courtroom where the MH17 trial of three Russians and a Ukrainian is taking place as it enters a new stage where families of victims of the MH17 plane crash give testimony in Badhoevedorp, Netherlands, September 6, 2021.
Image: REUTERS/Piroschka van de Wouw

Relatives of the 298 victims of Malaysian Airlines flight 17 on Monday accused Russia of lying about its alleged role in the downing of the plane as they began testifying in the Dutch murder trial of four suspects.

International investigators concluded that the passenger plane was shot down over eastern Ukraine with a missile fired by pro-Russian rebels. Moscow denies all responsibility.

The Dutch woman was the first of dozens of relatives who will be given an opportunity to speak or submit written statements over the coming three weeks.

MH17 was flying from Amsterdam to Kuala Lumpur when it was hit by what international investigators and prosecutors say was a Russian surface-to-air missile that originated from a Russian base just across the Ukrainian border.

Van der Steen made the remarks about lying in Russian, explaining that she did so “for the benefit of those who are listening in on behalf of the Russian regime today.”

“I want it to be known that I know where the responsibility lies,” she said, adding that “lying and falsehoods are a familiar tactic in this game of cat and mouse through which we are aspiring to uncover the truth”.

Russia's foreign ministry on Thursday said it was pointless to continue consultations with Australia and the Netherlands over the downing of Malaysia ...
News
1 year ago

Three Russians and a Ukrainian will face murder charges for the July 2014 downing of Malaysia Airlines flight MH17 over eastern Ukraine in which 298 ...
News
2 years ago

Australian Vanessa Rizk also pointed to Russian President Vladimir Putin and his government as part of the “political nightmare” that led to the crash.

“I still cannot fathom that our family is caught up in a frustrating and deadly political crisis,” Rizk, who lost both her parents in the crash when she was 22, told the judges via video link. She stressed her parents had no role in any of the politics that lead to their deaths.

Russia, which maintains that it has not funded or supported rebels fighting Ukrainian government troops, has refused to extradite the suspects.

Three Russians and a Ukrainian citizen, all suspected of having key roles in the separatist forces, are on trial for murder.

After years of collecting evidence, a team of international investigators concluded in May 2018 that the launcher used to fire the missile belonged to Russia's 53rd Anti-Aircraft Missile Brigade.

The fugitive suspects have been on trial for a year and a half. Only one sent lawyers to represent him so the case is not considered to be entirely tried in absentia under Dutch law.

Judges said on Monday they expected to issue a judgment in late 2022.