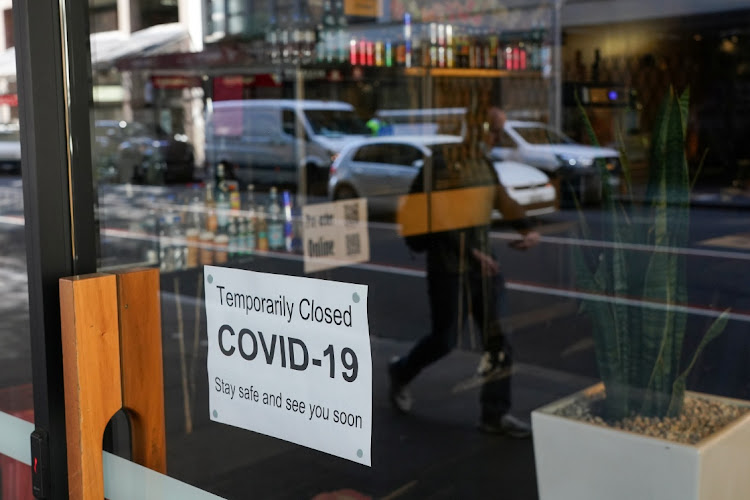 A sign is posted in the window of a closed cafe at the city centre during a lockdown to curb the spread of a coronavirus disease (Covid-19) outbreak in Sydney, Australia, September 7, 2021.
Image: REUTERS/Loren Elliott

Covid-19 daily infections in Sydney fell for a third straight day on Tuesday but still lingered near record levels as the outbreak spurred a spike in vaccination rates in the hard-hit western suburbs of Australia's largest city.

Officials have promised residents in Sydney, the epicentre of Australia's worst coronavirus flare-up, more freedom once vaccinations reach first 70%, then 80%, as a lockdown now into its eleventh week fails to quash the Delta variant.

“Don't be left behind when we start opening up. When we open up at 70% double dose, it will be only for those who are vaccinated,” New South Wales state Premier Gladys Berejiklian said at a media briefing in Sydney, the state capital.

More than 80% of adults in the three worst-affected local council areas in the city's west have had at least one dose, officials said, much higher than 74% for the state as a whole and the national average of 63%.

A total of 1,220 new infections were detected in New South Wales, most of them in Sydney, down from 1,281 a day ago. Eight new deaths were recorded in the state, taking the total in the latest outbreak to 139.

More than half of Australia's 25 million population has been locked down after Delta spread rapidly in Sydney and Melbourne, its largest cities. Rising case numbers forced Victoria to join New South Wales in ditching a Covid-19-zero target and both states are pushing for higher vaccinations to ease restrictions.

The Australian federal government in July unveiled a four-stage road map to more freedom once vaccination rates reach 70%-80%, but some virus-free states said they may not stick to the plan given the surge in cases in Sydney and Melbourne. Around 38% of Australia's adult population has been fully vaccinated, far less than in many other comparable countries. But it has handled the pandemic much better, with about 64,600 cases and 1,052 deaths.

As New South Wales races ahead with vaccinations, Victoria Premier Daniel Andrews accused the federal government of allocating more vaccines “under the table” for Sydney.

Prime Minister Scott Morrison said he did not “share the view” of Andrews, urging all Australians to get vaccinated.

Just over 61% of Victoria's adult population have had at least one dose. A total of 246 new local cases were reported in the state on Tuesday, steady on a day earlier.

Sydney, the epicentre of Australia's biggest coronavirus outbreak, is expected to see daily infections peak next week, authorities said on Monday, as ...
News
3 months ago

Vaccinated and wanting to travel? Here’s which countries you can visit

The UAE has opened applications for tourist visas to people from all countries, provided they are fully vaccinated with one of the Covid-19 ...
Lifestyle
3 months ago

Australia’s 'public health enemy number one' arrested for not isolating