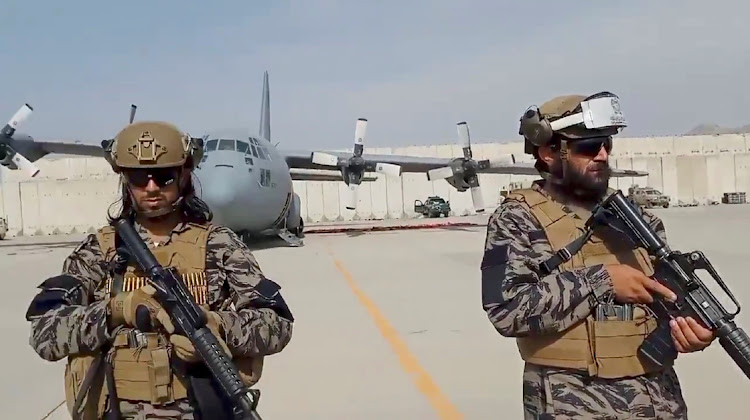 The Taliban have repeatedly sought to reassure Afghans and foreign countries they will not return to the brutality of their last reign two decades ago, marked by violent punishments and the barring of women and girls from public life.
Image: Taliban/Handout via REUTERS

The Taliban named Mullah Hasan Akhund, an associate of the movement's late founder Mullah Omar, as head of Afghanistan's new government on Tuesday and Sirajuddin Haqqani, whose organisation is on a US terrorism list, as interior minister.

Haqqani is the son of the founder of the Haqqani network, designated as a terrorist organisation by the United States. He is one of the FBI's most wanted men due to his involvement in suicide attacks and ties with Al Qaeda.

Baradar's appointment as Akhund's deputy, rather than to the top job, came as a surprise to some as he had been responsible for negotiating the US withdrawal and presenting the face of the Taliban to the world.

Baradar, also once a close friend of Mullah Omar, was a senior Taliban commander in charge of attacks on US forces. He was arrested and imprisoned in Pakistan in 2010, becoming head of the Taliban's political office in Doha after his release in 2018.

Mullah Mohammad Yaqoob, son of Mullah Omar, was named as defence minister. All the appointments were in an acting capacity, Mujahid said.

It was not clear what role in the government would be played by Mullah Haibatullah Akhundzada, the Taliban supreme leader. He has not been seen or heard in public since the collapse of the Western-backed government and the seizure of Kabul by the Islamist militant movement last month, as US-led coalition forces completed their withdrawal after a 20-year war.

White House spokeswoman Jen Psaki told reporters on Air Force One, as President Joe Biden flew to New York, that there would be no recognition of the Taliban government soon.

The Taliban claimed victory on Monday in the last part of Afghanistan still holding out against their rule, declaring that the capture of the ...
News
11 months ago

The Taliban have repeatedly sought to reassure Afghans and foreign countries they will not return to the brutality of their last reign two decades ago, marked by violent punishments and the barring of women and girls from public life.

Akhund, the new head of government, has been close to supreme leader Akhunzada for 20 years, and is longtime chief of the Taliban's powerful decision-making body Rehbari Shura, or leadership council. He was foreign minister and then deputy prime minister when the Taliban were last in power from 1996-2001.

Mujahid, speaking against a backdrop of collapsing public services and economic meltdown, said an acting cabinet had been formed to respond to the Afghan's people's primary needs.

He said some ministries remained to be filled pending a hunt for qualified people.

The United Nations said earlier on Tuesday that basic services were unravelling in Afghanistan and food and other aid were about to run out. More than half a million people have been displaced internally in Afghanistan this year.

An international donor conference is scheduled in Geneva on September 13. Western powers say they are prepared to send humanitarian aid, but that broader economic engagement depends on the shape and actions of the Taliban government.

The Taliban named Mullah Hassan Akhund, an associate of the movement's late founder Mullah Omar, as the head of Afghanistan's new government on ...
News
11 months ago

The appointment of a group of established figures from different elements of the Taliban gave no indication of any concession towards protests that broke out in Kabul earlier in the day, which Taliban gunmen fired in the air to disperse.

Hundreds of men and women shouting slogans such as "Long live the resistance" and "Death to Pakistan" marched in the streets to protest against the Taliban takeover. Neighbouring Pakistan has deep ties with the Taliban and has been accused of assisting its return to power - charges Islamabad denies.

The Taliban's rapid advance across Afghanistan last month triggered a scramble to leave by people fearing reprisals. US-led foreign forces evacuated about 124,000 foreigners and at-risk Afghans, but tens of thousands were left behind.

Secretary of State Antony Blinken said the United States was in contact with about 100 Americans who were still in Afghanistan.

About 1,000 people, including Americans, have been stuck in the northern city of Mazar-i-Sharif for days awaiting clearance for charter flights to leave, an organiser told Reuters, blaming the delay on the US State Department.

Blinken, holding talks in Qatar, a key interlocutor with the Taliban, said the problem was one of documents.

"My understanding is that the Taliban have not denied exit to anyone holding a valid document, but they have said those without valid documents, at this point, can't leave," he told reporters.

"Because all of these people are grouped together, that's meant that flights have not been allowed to go."

The Taliban said on Sunday their forces had fought their way into the provincial capital of Panjshir, the valley where opposition forces have been ...
News
11 months ago

On Monday, the Taliban claimed victory in the Panjshir valley, the last province holding out against it.

Pictures on social media showed Taliban members standing in front of the Panjshir governor's compound after days of fighting with the National Resistance Front of Afghanistan (NRFA), commanded by Panjshiri leader Ahmad Massoud.

Massoud denied that his force, consisting of remnants of the Afghan army as well as local militia fighters, was beaten, and tweeted that "our resistance will continue".