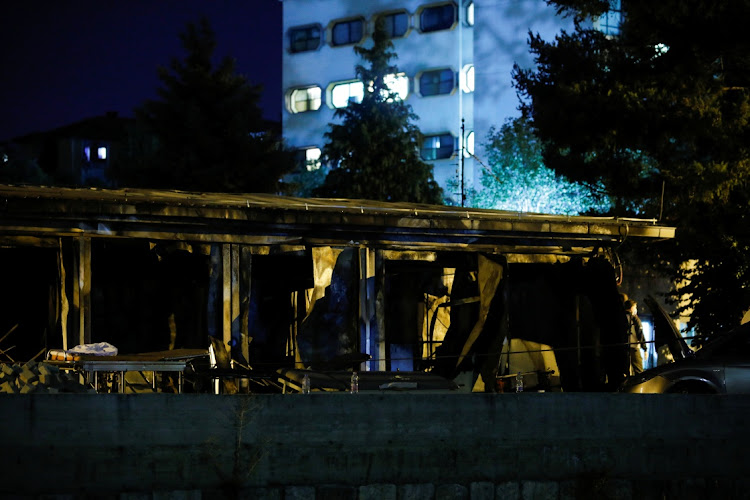 A hospital for coronavirus disease (Covid-19) patients is seen after a fire broke out, in Tetovo, North Macedonia, September 9, 2021.
Image: REUTERS/Ognen Teofilovski

Fourteen people were killed and 12 seriously injured when a fire broke out in a makeshift hospital for Covid-19 patients in the North Macedonian town of Tetovo late on Wednesday, the Balkan country's health ministry said on Thursday.

The prosecutor's office said DNA analyses would be needed to identify some of the victims, all of them patients in a serious condition. No medical staff were among the victims.

The total of 26 patients were accommodated in the Covid-19 hospital at the time of the fire, said Health Minister Venko Filipce.

“The remaining 12 patients with life-threatening injuries are being taken care at the Tetovo hospital,” Filipce said on Twitter.

Prime Minister Zoran Zaev said the fire was caused by an explosion, and that the investigation was under the way. Local media said that a canister with oxygen or gas may have exploded.

Local media showed images of a huge blaze which broke out around 9pm (1900 GMT) at the hospital in the town's west as firefighters raced to the scene. The fire was extinguished after a few hours.

The accident occurred on the day when North Macedonia marked the 30th anniversary of its independence from the former Yugoslavia. All official celebrations and events were cancelled on Thursday, said the office of President Stevo Pendarovski.

Coronavirus cases have been on the rise in North Macedonia since mid-August, prompting the government to introduce stricter social measures such as health passes for cafes and restaurants.

The country of 2 million reported 701 new coronavirus infections and 24 deaths in the past 24 hours.

The town of Tetovo, mainly inhabited by ethnic Albanians, has one of the country's highest number of coronavirus cases.