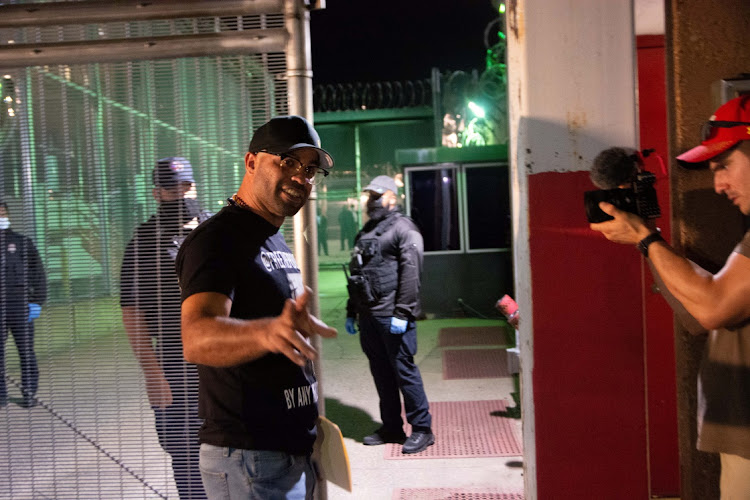 In the July recording, Enrique Tarrio tried to knock down possible speculation on social media that Rehl, president of the Philadelphia Proud Boys, was cooperating. Picture taken September 7, 2021. Ford Fischer/News2Share via REUTERS NO RESALES. NO ARCHIVES. THIS IMAGE HAS BEEN SUPPLIED BY A THIRD PARTY.
Image: FORD FISCHER/NEWS2SHARE

As four of his fellow Proud Boy leaders sat in jail this summer, charged with conspiracy in the violent January 6 insurrection at the US Capitol, the group’s chairman, Enrique Tarrio, sent out a private audio message to colleagues around the country.

In the July audio, a copy of which was reviewed by Reuters, Tarrio said that “we are trying to f---ing avoid” a situation in which the senior members facing charges would cooperate with prosecutors. The four, who are jailed without bond, have pleaded not guilty.

Raising the possibility that one of the four leaders may have been cooperating with authorities, Tarrio told fellow Proud Boy leadership he didn’t believe that the man was doing so – and said he had spoken about the matter directly with that leader’s wife.

“The bigger problem with that is the guys that are in prison right now are holding on to hope that everybody is f---ing staying put because they didn’t do anything wrong,” Tarrio said. “The moment that they think one of the guys flipped, it throws everything off and it makes everybody turn on each other, and that’s what we are trying to f---ing avoid.”

Asked about the audio message, Tarrio told Reuters he was simply trying to stop members from speculating that anyone had decided to help prosecutors who are examining the deadly insurrection. “What I was trying to avoid is them turning against each other because of media stories,” he said.

Reuters was unable to determine if Tarrio is a target in the federal investigations of the Capitol Hill riot. He has not been charged in the case. Tarrio was arrested two days before the insurrection took place on separate charges; this week, he began serving a 155-day sentence for burning a Black Lives Matter banner and possessing a banned high-capacity rifle magazine in Washington.

Three former prosecutors consulted by Reuters said Tarrio’s audio message to the group and his call to the leader’s spouse to discuss reports of cooperation by her husband could warrant a review into whether Tarrio was obstructing justice.

Under federal law, the crime of obstruction of justice can occur if someone “corruptly or by threats or force, or by any threatening letter or communication, influences, obstructs, or impedes, or endeavors to influence, obstruct, or impede, the due administration of justice.” Attempting to prevent someone from testifying can be construed as witness tampering, a form of obstruction.

“This shows a real effort to protect the group and deter defectors,” said Daniel Richman, a former federal prosecutor who teaches at Columbia Law School. Still, Richman emphasized that the audio on its own does not prove an effort to obstruct justice.

Bruce A. Green, a former federal prosecutor who teaches at Fordham Law School, said the message “would be a basis to start an investigation.” He agreed with Richman that the audio alone would not prove obstruction.

Mary McCord, a professor at Georgetown University and former acting attorney general for National Security Affairs, said the tape “raises the specter of possible efforts to influence the charged individuals not to cooperate.” But she added, “There’s nothing on that tape that would allow you to get an indictment on obstruction.”

Without more information, she said, it would be difficult to assess Tarrio’s conversation with the fellow leader’s wife. The discussion could have been “benign,” she said, but added that “a reasonable person” could be intimidated if the leader of an organization spoke to them about a family member potentially cooperating with authorities.

Told of the comments by the former prosecutors and asked if his communications may have amounted to obstruction of justice, Tarrio said: “Absolutely not.”

Police will reinstall a tall fence around the US Capitol ahead of next week's planned rally by supporters of the roughly 600 people charged in ...
News
2 months ago

The day Reuters asked Tarrio about the July audio message, August 27, he sent another, shorter private message to Proud Boys leaders, complaining that the leaking of the first tape to Reuters put him in “felony territory.” Reuters also obtained this second audio. Both recordings were shared on the condition that Reuters not identify sources.

“You know it’s hard enough to fight a f---ing entire government…,” Tarrio said in the August 27 message, “to have to worry about dudes in here f---ing putting you in felony territory. Not just regular felony, like a serious felony.”

Tarrio told Reuters the reference to a “serious felony” was simply a reminder to members that they should not fight among themselves. He said there was no actual felony.

Tarrio was pressing his colleagues not to turn on each other years after he himself had cooperated with federal authorities. As Reuters reported in January, a 2014 court transcript shows that Tarrio cooperated with the FBI after being charged with fraud in 2012, even going undercover to aid in numerous investigations. That was well before he became Proud Boys chairman in 2018.

The Proud Boys have been a key focus in the federal probe into efforts by supporters of former President Donald Trump to thwart the results of last year’s election by raiding Congress on the day of the formal certification.

The four senior Proud Boys held on federal charges – Joseph Biggs, Ethan Nordean, Charles Donohoe and Zach Rehl – were videotaped leading a crowd toward the Capitol on Jan. 6. In court filings, the US government said they helped lead the offensive. The men dispute the charges.

In the July recording, Tarrio tried to knock down possible speculation on social media that Rehl, president of the Philadelphia Proud Boys, was cooperating.

The rumor spread after a journalist tweeted that Zehl’s lawyer sought a delay in a pending case hearing, and asked: “What are the ‘developments’ that require ‘ongoing conversations’ with the government?” The tweet did not claim Zehl was cooperating. But Tarrio incorrectly described the tweet as asserting that Zehl was “talking or cooperating with the feds.”

Tarrio told his fellow Proud Boys there was no cooperation. “And if there is anybody that will hold fast, it’s f---ing Zach.” Tarrio said later in the recording that “it’s fine to question things but I just want you guys to know the truth. I got off the phone with Zach’s wife this morning.”

Tarrio said he spoke to Rehl's wife about the social media rumors. Reuters could not reach her for comment.

Reached by Reuters, Rehl’s new lawyer, Jonathan Alden Moseley, initially said he was unaware of the Tarrio messages and of his phone conversation with Rehl’s wife. He called later to add that he had learned the call did indeed take place and said he discussed the matter with Rehl’s wife.

“It was about the stories that he might flip,” Moseley said of the call. Moseley declined to comment on behalf of Rehl’s wife, saying he is not her lawyer. But he noted that she does not share her husband’s “activism.”

Rehl, he added, is not cooperating with the investigation.

A Proud Boys supporter pleaded guilty on Monday to making social media threats tied to the January 6 riot at the US Capitol, including a threat to ...
News
3 months ago