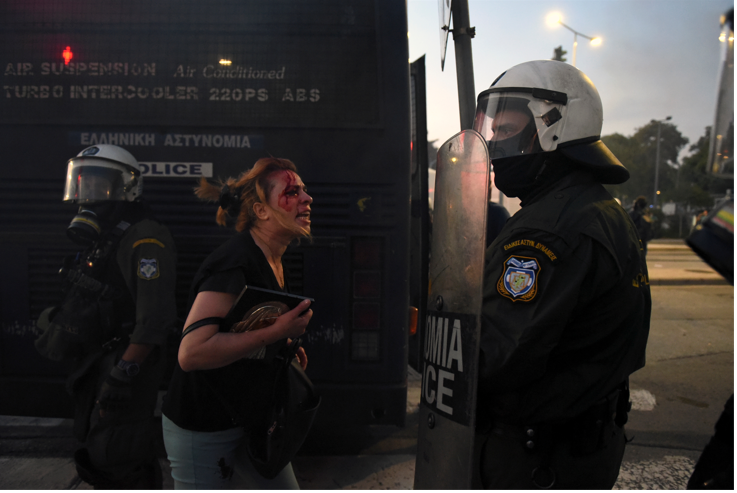 SENSITIVE MATERIAL. THIS IMAGE MAY OFFEND OR DISTURB An injured woman shouts at a riot police officer as people protesting against coronavirus disease vaccinations clash with police, during the annual speech of Greek Prime Minister Kyriakos Mitsotakis on the state of the country's economy, in Thessaloniki, Greece on September 11 2021.
Image: REUTERS/Alexandros Avramidis

Greek police fired tear gas and water canon on Saturday to break up a demonstration of thousands of people protesting against mandatory coronavirus vaccinations.

Authorities said protesters hurled flares at police in Greece's second-biggest city of Thessaloniki, who blocked them from trying to reach the area where Prime Minister Kyriakos Mitsotakis was due to deliver his annual economic address.

The annual speech typically attracts crowds of demonstrators, and police estimated more than 15,000 people, including labour unions, took part in the demonstrations on issues ranging from economic policy to Covid-19 vaccines.

Protests against Covid-19 vaccinations began in July after the government announced the mandatory inoculation of health care workers and nursing home staff. Authorities have suggested vaccines could become obligatory for other groups too, such as teachers.

"Yes to vaccines, but not mandatorily," the federation of public hospital workers, POEDYN, said in a statement.

Greece has suspended nearly 6,000 frontline health care workers from their jobs for missing a September 1 deadline to get at least one vaccine shot. Earlier this month, it offered unvaccinated healthcare workers a second chance to get a shot and allow those who have been suspended to return to work.

POEDYN is worried that a total of 10,000 unvaccinated staff could be suspended, disrupting operations at understaffed hospitals at a time when infections remain high.

Demonstrations against compulsory vaccination also took place in Istanbul on Saturday, where more than 2,000 Turks protested against the government's new inoculation push.

Around 5.7-million Greeks, or 55% of the population, are fully vaccinated against Covid-19 and 59% have received one dose, according to the latest official figures.

The country recorded 2,197 confirmed new infections on Saturday, and 39 deaths.

Protesters in France demonstrate against Covid-19 pass for sixth weekend

Thousands demonstrated across France for a sixth consecutive weekend on Saturday against a Covid-19 health pass required for daily activities, ...
News
4 months ago

The government must address problems like a lack of access to trustworthy information about vaccines by bolstering its efforts to make verified and ...
Ideas
5 months ago