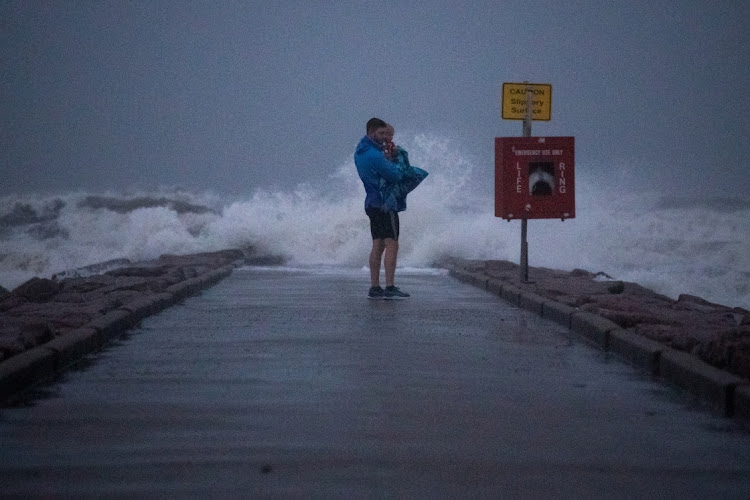 Local resident John Smith holds his 18-month-old son Owen as he stands near breaking waves on a pier ahead of the arrival of Tropical Storm Nicholas in Galveston, Texas, US, September 13, 2021.
Image: REUTERS/Adrees Latif

Tropical storm Nicholas strengthened into a hurricane late on Monday, and is set to batter the Gulf Coast of Texas and Louisiana with rising seawater and rains that could cause widespread and life-threatening flooding.

The hurricane, carrying winds of 75mph (120kph), was about 45 miles (75 kms) southwest of Freeport Texas, the National Hurricane Center (NHC) said in a bulletin on Monday night.

Nicholas was bringing heavy rains, strong winds, and storm surges to portions of the central and upper Texas coasts, the centre said.

“It will be a very slow-moving storm across the state of Texas that will linger for several days and drop a tremendous amount of rain,” Texas Governor Greg Abbott said on Monday afternoon. “People in the region need to be prepared for extreme high-water events.”

Abbott said he will declare states of emergency in 17 counties and three cities across coastal Texas, adding that boat and helicopter rescue teams have been deployed or placed on standby.

Rainfall totals of up to 16 inches (40.6cm) and possibly 20 inches in some isolated areas were forecast for parts of Texas through Wednesday. As Nicholas moves northeast, it was expected to dump as much as 10 inches on parts of south central Louisiana and southern Mississippi through Thursday, the NHC said.

The National Weather Service issued storm surge, flood and tropical storm warnings and watches throughout the region, calling it a “life-threatening situation.”

ON THE HEELS OF IDA

Nicholas is the second hurricane in as many weeks to threaten the US Gulf Coast. Hurricane Ida wreaked havoc  in late August, killing more than two dozen people as it devastated communities in Louisiana near New Orleans.

“We want to make sure that no-one is caught off guard by this storm,” Louisiana Governor John Bel Edwards said at a news briefing on Monday afternoon. “Heavy rainfall will be the primary concern.”

Edwards warned that drainage systems still clogged with debris from Ida and other recent storms may not be able to handle the expected deluge of rainwater, causing flash flooding.

Teams of rescue workers with high-water vehicles and boats were prepared to respond to people trapped by flooding across southern Louisiana, Edwards said.

Nicholas could also knock out electricity and hamper restoration efforts as more than 119,000 homes and businesses remain without power from Ida, he said.

Houston Mayor Sylvester Turner urged the city's 2.3 million residents to stay at home starting on Monday evening. Parts of the city were expected to get 8 inches (20cm) or even more rain, according to the forecast.

“Take things seriously and prepare,” he said during a news conference. “This is primarily a rain event and we don't know how much rain we will be getting.”

Houston, the fourth-most populous city in the US, was devastated in 2017 when Harvey, a Category 4 hurricane, slammed Texas, dropping up to 40 inches of rain in some sections and killing more than 100 people.

As of Monday afternoon, heavy rains fell for about three hours in Houston, where winds were light.

Houston Independent School District cancelled classes for Tuesday, while dozens of districts in Texas and Louisiana shut down on Monday. Houston METRO was suspending light rail and bus services on Monday evening while hundreds of flights were cancelled or delayed at airports in Corpus Christi and Houston.

Waves stirred up by Nicholas near 12 feet (3.7m) in height were reported outside Port Aransas, near Corpus Christi, Texas, with wind gusts up to 54mph about 40 miles east of Padre Island. Winds were expected to remain at 60mph with higher wind gusts, forecasters said.

Nueces County, which includes the city of Corpus Christi, issued a disaster declaration on Monday, saying that community was under a threat of imminent disaster, injury and loss of life or property due to the anticipated storm.

But on Monday afternoon, conditions in the coastal city of Galveston were still relatively calm, though wind gusts reached nearly 50mph.

“It ain't even raining,” said Mike Garcia, manager of the Gumbo Diner. “The water's choppy, but we have a full restaurant.”

Royal Dutch Shell on Monday began evacuating staff from a US Gulf of Mexico oil platform and other firms began preparing for hurricane-force winds.

Chatsworth bride Simone Aricksamy's dream of a white wedding came true last week - literally - when snow fell at the venue for her nuptials in the ...
Lifestyle
11 months ago

The World Meteorological Organisation (WMO) says its "Atlas" is the most comprehensive review of mortality and economic losses from weather, water ...
News
11 months ago