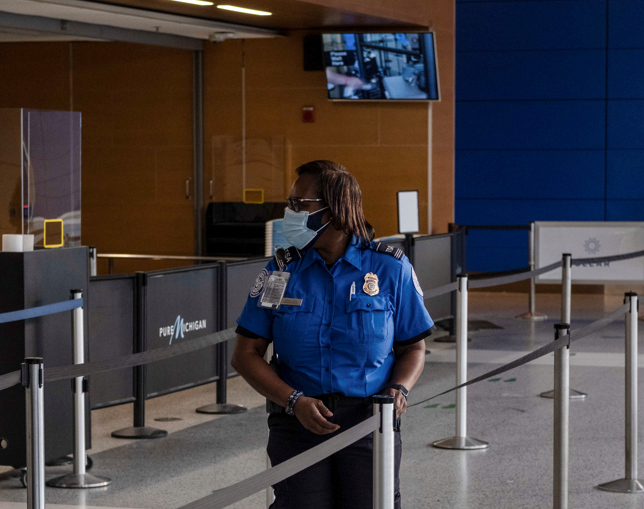 The US Capitol Police on Wednesday said it has asked the Pentagon to provide National Guard troops if they are needed to help with security.
Image: REUTERS/Seth Herald

Travelers arriving at the airport nearest Washington, DC, will face increased security in the run-up to a planned Saturday rally supporting people charged with taking part in the deadly January 6 riot, the Transportation Security Administration said.

"Travelers will notice increased law enforcement and canine presence along with a generally higher level of awareness in TSA’s intelligence-driven, risk-based approach to transportation security," a TSA spokesperson told Reuters, referring to Reagan National Airport, in Virginia just across the Potomac River.

Hundreds of far-right demonstrators are expected in the District of Columbia for the "Justice For J6" rally, a reference to the Jan. 6 storming of the US Capitol by supporters of Donald Trump in an attempt to stop certification of President Joe Biden's election victory.

Trump has continued his false claims that his defeat was the result of widespread election fraud, an assertion that was rejected by multiple courts, state election authorities and members of his own administration.

The pro-Trump group organising the September 18 rally, Look Ahead America, has alleged that the more than 600 people facing criminal charges over the January 6 riots have been mistreated and singled out because of their political views.

Police have ramped up security around the Capitol in response, mindful of the scenes that played out early this year when rioters attacked police, smashed through windows into the building and sent lawmakers and then-Vice President Mike Pence running for safety.

A fence that was put up around the Capitol following that day, which had been taken down in July, was being reassembled in place around the white-domed building on Thursday.

The fencing separated the lawns of the Capitol grounds from other government landmarks including the Supreme Court, the Library of Congress, congressional office buildings and the Capitol Reflecting Pool just west of Capitol Hill, where protesters were scheduled to gather on Saturday.

There were few other signs of beefed-up security, though plexiglass police shields could be seen stacked at police checkpoints inside doorways to the Capitol building.

Four people died on January 6, one fatally shot by police and three from medical emergencies. A Capitol Police officer who had been attacked by protesters died the following day. Four police officers who took part in the defense of the Capitol later committed suicide.

The US Capitol Police on Wednesday said it has asked the Pentagon to provide National Guard troops if they are needed to help with security.

Trump referred to the upcoming protest in a statement on Thursday, saying, "Our hearts and minds are with the people being persecuted so unfairly relating to the January 6th protest concerning the Rigged Presidential Election."

Police and congressional leaders said they are prepared for Saturday's protest, which will come at a time that most members of Congress will be out of town.

House of Representatives Speaker Nancy Pelosi, participating at a forum in Britain on Thursday, said, "They have their plans. Everybody will be more ready for them."

Fence goes up around US Capitol ahead of Saturday rally

Workers began installing a fence around the US Capitol late on Wednesday ahead of a protest scheduled for September 18, and police asked the National ...
News
2 months ago

Police will reinstall a tall fence around the US Capitol ahead of next week's planned rally by supporters of the roughly 600 people charged in ...
News
2 months ago

A lawyer for a man linked by prosecutors to the anti-government Oath Keepers group on Wednesday asked a judge to consider moving his possible trial ...
News
2 months ago