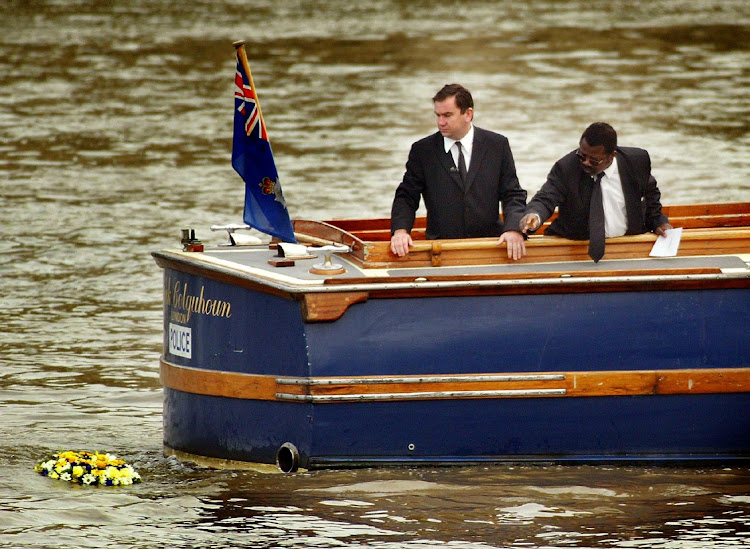 Detective Inspector Will O'Reilly (L) and John Azah of the Independent Advisory Group place a wreath in the River Thames at the place where the torso of a boy, who police have called 'Adam', was found in 2001.
Image: REUTERS/Peter Macdiarmid/File Photo

Police in London appealed on Tuesday to anyone with information about the murder of a Nigerian boy whose torso was found in the River Thames 20 years ago to come forward to help them solve the case, which they believe may have been a ritualistic killing.

The boy was aged five or six when his body, which had had the head and limbs severed, was found floating near Tower Bridge. Police believe he was trafficked from Nigeria to Britain, possibly via Germany.

The boy's identity remains a mystery. Police have named him “Adam” and say forensic tests show he was from Nigeria.

“It is incredibly sad and frustrating that Adam's murder remains unsolved,” said Kate Kieran, a homicide detective at the Metropolitan Police.

She said people who knew something about the killing may not have wanted to speak up at the time and may have felt loyal to the killer or killers, but allegiances and relationships may have changed.

“We implore them to be bold and come forward if they know something so that we can finally deliver justice,” said Kieran.

The case has been the subject of numerous high-profile appeals over the years, including by Nelson Mandela who asked all African communities to help the police.

British detectives have made inquiries in Britain, SA, Holland, Germany and Nigeria.