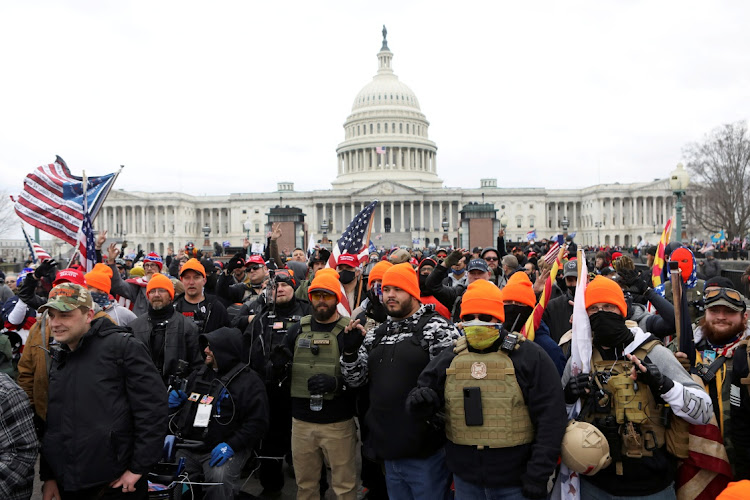 Proud Boys are one of three right-wing militia groups targeted by prosecutors for their role in the riot by supporters of then-President Donald Trump that broke out as Congress met to certify Joe Biden's November presidential election victory.
Image: REUTERS/Jim Urquhart/File Photo

A federal judge on Tuesday set May 18 as a tentative date for the start of a trial of four men allegedly affiliated with the "Proud Boys" movement on charges stemming from their participation in the January 6 US Capitol riot.

US District Judge Timothy Kelly said that a May trial slot was the first available for a large courtroom at the Washington DC federal courthouse often used on ceremonial occasions. In conversations with defense lawyers, the judge discussed the possibility of a trial running four to six weeks.

All four defendants facing trial in the case - Ethan Nordean, Joseph Biggs, Zachary Rehl and Charles Donohoe - are currently held in pre-trial custody. Defense lawyers have made multiple unsuccessful efforts to win their release on bail. A further status hearing was set for October 26.

Proud Boys are one of three right-wing militia groups targeted by prosecutors for their role in the riot by supporters of then-President Donald Trump that broke out as Congress met to certify Joe Biden's November presidential election victory. Prosecutors said last week that more than 600 defendants had been arrested on riot-related charges.

The four facing the May trial were videotaped leading a crowd toward the Capitol on January 6. In court filings, the US government said they helped lead the break in of the Capitol. The men dispute the charges.

A defense lawyer has said that the FBI possesses videos showing that Nordean, alleged to be one of the Proud Boys' January 6 leaders, advised group members marching toward the Capitol that their goal was a photo op and that they would only spend a few minutes at the Capitol and then turn around.

Four people died on the day of the riot, one fatally shot by police and three from medical emergencies. A Capitol Police officer who had been attacked by protesters died the following day.

A lawyer for a man linked by prosecutors to the anti-government Oath Keepers group on Wednesday asked a judge to consider moving his possible trial ...
News
1 month ago

A federal judge on Monday dealt an eight-month prison sentence to Paul Hodgkins for the Florida man's role in the January 6 attack on the US Capitol, ...
News
3 months ago

As four of his fellow Proud Boy leaders sat in jail this summer, charged with conspiracy in the violent January 6 insurrection at the US Capitol, the ...
News
1 month ago