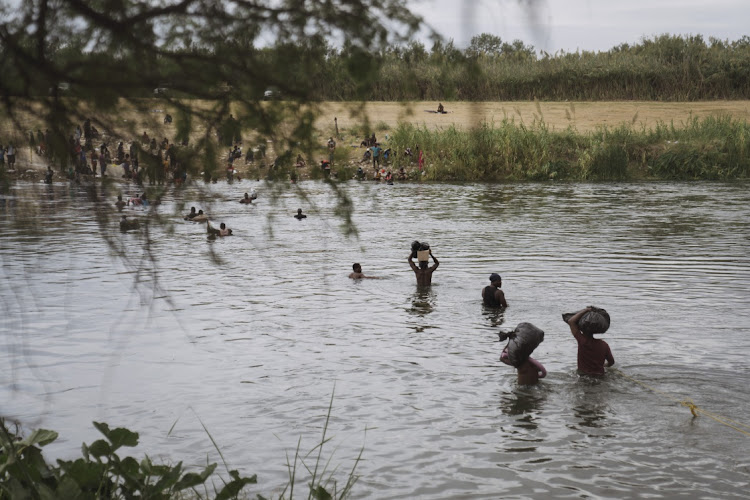 Migrants cross the Rio Grande River near the Del Rio-Acuna Port of Entry in Acuna, Coahuila state, Mexico, on Tuesday, September 21, 2021. The Department of Homeland Security is investigating a heated confrontation between border patrol agents on horseback and Haitian migrants seeking asylum in the US.
Image: Eric Thayer/Bloomberg

The mass expulsion of Haitians from the US without screening for their protection needs may contravene international law and constitute forced returns, the United Nations' top refugee official Filippo Grandi said on Tuesday.

He urged the US to lift its Title 42 health-related restrictions in place since March 2020, saying they “deny most people arriving at the southwest US land border any opportunity to request asylum”.

“The summary, mass expulsions of individuals currently under way under the Title 42 authority, without screening for protection needs, is inconsistent with international norms and may constitute refoulement,” Grandi said in the Geneva-based agency's strongest statement since the crisis began.

He voiced shock at images of the “deplorable conditions” under a concrete highway overpass in Del Rio, Texas, where more than 14,000 Haitians had gathered after fleeing countries in the Americas, many hoping to seek asylum.

The camp under a bridge over the Rio Grande along the southern border with Mexico has become the latest flashpoint for US authorities seeking to stem a flow of migrants fleeing extreme violence or poverty in their home countries.

“We are disturbed by the images that we have seen and by the fact that we have seen all these migrants and refugees and asylum seekers in transport to Port-au-Prince,” UN human rights spokesperson Marta Hurtado told a briefing in Geneva.

“We are seriously concerned by the fact that it appears there have not been any individual assessments of the cases ... and that therefore maybe some of these people have not received the protection that they needed.”

US President Joe Biden faced pressure on Tuesday to halt the expulsion of asylum seekers to Haiti from the camp, as worries about their safety compounded disquiet at images of officials on horseback using reins as whips against migrants.

Title 42 relates to an order issued in March 2020 by the US Centers for Disease Control and Prevention, which cited the need to limit the spread of the coronavirus.

Several hundred people have been sent to Haiti from the camp in Del Rio, since Sunday. Thousands more have been moved into US detention for processing and more flights   are due to leave on Tuesday, Department of Homeland Security Secretary Alejandro Mayorkas said.

“While some people arriving at the border may not be refugees, anyone who ... claims to have a well-founded fear of being persecuted in their country of origin - they should have access to asylum and to have their claim assessed before being subjected to expulsion or deportation,” UN refugee agency spokesperson Shabia Mantoo told the briefing.

More than 300 Haitians were returned home on Sunday after the US ejected them from Texas, leaving many of the would-be migrants demoralised and angry ...
News
4 months ago