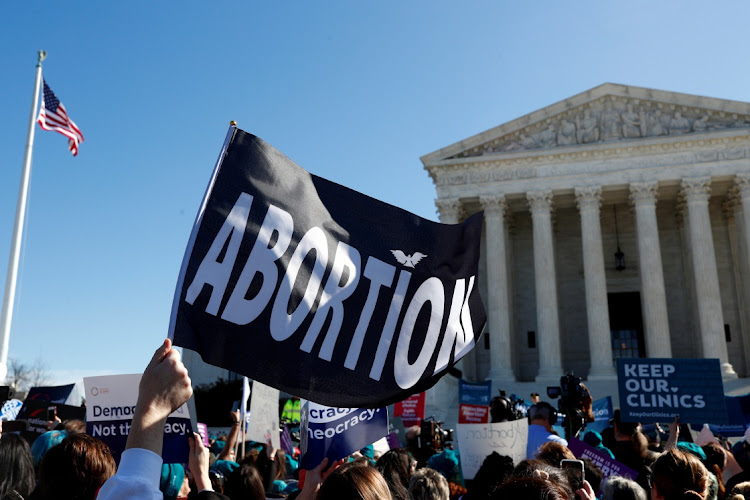 President Joe Biden's administration on Friday urged a judge to block a near-total ban on abortion imposed by Texas - the strictest such law in the nation - in a key moment in the ferocious legal fight over abortion access in the United States.

The US Supreme Court on September 1 allowed the Republican-backed law to take effect even as litigation over its legality continues in lower courts. The US Justice Department eight days later sued in federal court to try to invalidate it.

During a hearing in the Texas capital of Austin, Justice Department lawyers asked US District Judge Robert Pitman to block the law temporarily, saying the state's Republican legislature and governor enacted it in an open defiance of the Constitution.

"There is no doubt under binding constitutional precedents that a state may not ban abortions at six weeks," said Brian Netter, the lead Justice Department attorney on the case.

"Texas knew this but, it wanted a 6-week ban anyway. So this state resorted to an unprecedented scheme of vigilante justice."

The Texas law bans abortions starting at six weeks of pregnancy, a point when many women may not realise they are pregnant. About 85% to 90% of abortions are performed after six weeks. Texas makes no exception for cases of rape and incest.

It also lets ordinary citizens enforce the ban, rewarding them at least $10,000 if they successfully sue anyone who helped provide an abortion after fetal cardiac activity is detected.

"This is not some kind of vigilante scheme, as opposing counsel suggests," said Thompson. "This is a scheme that uses lawful process of justice in Texas."

Pitman, who was appointed by Democratic former President Barack Obama in 2014, at one point seemed skeptical of Thompson's arguments, telling him Texas seems to have "gone to great lengths" to make its abortion ban difficult to challenge in court.

The judge said: "My obvious question to you is: If the state is so confident in the constitutionality of the limitations on woman's access to abortion, then why did it go to such great lengths to create this private cause of action rather than do it directly?"

Thompson responded that laws providing for enforcement are not as unusual as the Justice Department has claimed.

In the 1973 Roe v. Wade ruling that legalised abortion nationwide, the Supreme Court recognised a woman's constitutional right to terminate a pregnancy.

The high court in December is due to hear arguments over the legality of a Mississippi abortion law in a case in which officials from that state are asking the justices to overturn Roe vs. Wade.

The Mississippi and Texas laws are among a series of Republican-backed measures passed by various states restricting abortion.

Since the Texas law went into effect, the four Whole Woman's Health abortion clinics across the state have reported that patient visits have plummeted and some staff have quit.

In addition to infringing on women's constitutional rights to seek an abortion, the Justice Department argued that the law also impedes the federal government's own ability to offer abortion-related services.

In an effort to counter those claims, attorneys for the state on Friday played clips from depositions of various senior US government officials.

In one clip, lawyers interrogated Alix McLearen, a senior official at the Bureau of Prisons who, in response to questions, testified that there were currently no pregnant inmates being held at certain detention facilities in Texas.

In another clip, Laurie Bodenheimer of the Office of Personnel Management was asked whether any insurance carriers had raised concerns about the impact or effect of the Texas law.

"To my knowledge no carrier has raised concerns about SB8," she said.

The Justice Department's Netter told the judge that Texas had cherry-picked some of the sound bites in the videos and edited out the portions in which Department attorneys had objected during the depositions.

Netter noted, for instance, that Texas conveniently omitted a portion of McLearen's testimony in which she said the prisons bureau has pregnant inmates incarcerated currently at FMC Carswell, which he noted is "the only secure medical facility for women" in the entire country.

"It is irreparable injury for there to be a violation of the Supremacy Clause," Netter said, referring to the Constitutional principle that establishes that federal laws have supremacy over state laws.

More than 600 marches are planned around the United States on Saturday to protest the Texas law.

In Washington, DC, protesters will march to the US Supreme Court to decry the court's 5-4 decision in September that denied a request from abortion and women's health providers to enjoin enforcement of the ban.

The Biden administration formally asked a federal judge on Tuesday to block enforcement of a new Texas law that effectively bans almost all abortions ...
News
9 months ago

The US Department of Justice on Thursday sued Texas after President Joe Biden vowed to challenge a new law that almost entirely bans abortion in the ...
News
9 months ago

Mexico's Supreme Court unanimously ruled on Tuesday that penalising abortion is unconstitutional, a major victory for advocates of women's health and ...
News
9 months ago