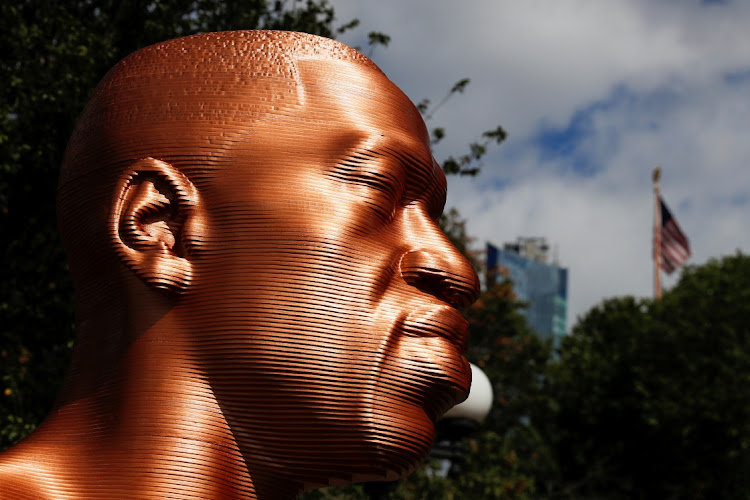 A sculpture of George Floyd is seen during the SEEINJUSTICE art exhibition, in New York, US September 30, 2021.
Image: REUTERS/Shannon Stapleton/ File photo

The Texas State Board of Pardons and Paroles voted on Monday to recommend George Floyd get a full posthumous pardon for a 2004 drug conviction, the Harris County District Attorney said.

Floyd, a 46-year-old Black man who died in handcuffs with a white Minneapolis police officer kneeling on his neck for over nine minutes during a 2020 arrest, became the face of a movement challenging police brutality and bias in the US criminal justice system.

The Texas board voted 7-0 to recommend the pardon, media reported, adding that the recommendation would be passed on to the Texas governor, Greg Abbott, for a final decision.

Floyd's conviction was related to a February 2004 case when a police officer accused him of selling $10 worth of crack cocaine in a sting operation in Texas when he lived there, the Associated Press report.

Floyd later pleaded guilty to a drug charge and was sentenced to 10 months in a state jail, the news agency said.

“We lament the loss of former Houstonian George Floyd and hope that his family finds comfort in Monday’s decision by the Texas State Board of Pardons and Paroles to recommend clemency for a 2004 conviction,” Harris County District Attorney Kim Ogg said in a statement Monday.

Ogg urged the state governor to follow the board’s recommendation and grant clemency.

In April, an application for a posthumous pardon was filed on behalf of Floyd and his surviving family on the grounds that the arresting officer had manufactured the existence of confidential informants to bolster his cases, media reported.

The Texas State Board of Pardons and Paroles and Abbott's office were not immediately available for comment late on Monday night.

Floyd's death, which a passer-by caught on video, stoked social upheaval, racial tensions and political strife in the US and beyond.

The verdict was widely seen as a landmark rebuke of the disproportionate use of police force against Black Americans.

A report suggests a statue of William Beckford remain in London’s Guildhall, despite earlier agreement to remove it
World
10 months ago

Derek Chauvin to appeal his conviction, sentencing in death of George Floyd

Former Minneapolis police officer Derek Chauvin has filed an intent to appeal with the Minnesota state appellate court in his murder conviction for ...
News
10 months ago

EXPLAINER-What 'critical race theory' means and why it's igniting debate

The term 'critical race theory' gained a foothold in the conservative American consciousness in 2020 after the murder of George Floyd, an event that ...
News
10 months ago