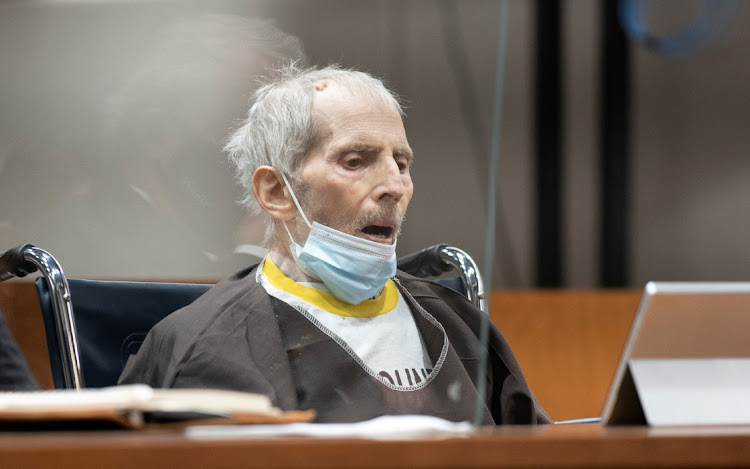 Robert Durst is seen being sentenced to life without possibility of parole for the killing of Susan Berman, at Airport Courthouse, in Los Angeles, California, US, October 14, 2021.
Image: Myung J. Chun/Pool via REUTERS

A California judge on Thursday sentenced real estate heir Robert Durst to life in prison without the possibility of parole for murdering his best friend Susan Berman in 2000, in a long-delayed punishment for a man who mostly evaded the law over 39 years.

Durst, 78 and in poor health, appeared dejected and was slumped in his wheelchair during the hearing, unshaven and dishevelled in his Los Angeles County jail uniform.

A much more confident and robust Durst had defiantly jousted with filmmakers in a 2015 documentary series when he seemed to inadvertently confess to murder on microphone.

Durst, a multimillionaire whose grandfather founded one of New York City's premier real estate companies, was long a suspect but never charged in the disappearance of his wife Kathleen McCormack, who went missing in New York in 1982.

Survivors of Berman who spoke at the hearing pleaded with Durst to reveal where he hid his wife's body, saying it might grant him a chance at some redemption.

“He should let us know where Kathie's body is so her family can get some closure,” said David Berman, the victim's cousin.

Susan Berman's relatives expressed some remorse on her behalf, as evidence from the trial indicated Berman helped provide Durst with a false alibi in McCormack's disappearance. Prosecutors alleged that Durst killed Berman because he feared she would finally reveal what she knew to authorities.

Last month a jury found Durst guilty of shooting Berman, 55, in the back of the head in her Beverly Hills home. The jury also found him guilty of the special circumstances of lying in wait and killing a witness, which carry a mandatory life sentence without the possibility of parole.

Superior Court Judge Mark Windham, who pronounced the sentence, also denied a defence request for a new trial, saying there was “overwhelming evidence of guilt” that was proved many times over.

The trial came six years after Durst's apparent confession was aired in the HBO television documentary series “The Jinx,” in which Durst, who was still wearing a live microphone after an interview, went into a bathroom and said to himself, “What the hell did I do? ... Killed them all, of course.”

Durst was only on trial for killing Berman in California, but prosecutors argued he murdered three people: his missing wife, Berman and a neighbour in Texas who discovered his identity when Durst was hiding from the law. Durst was previously acquitted of the Texas case despite admitting to dismembering the man's body.

The McCormack family has urged prosecutors in Westchester County, New York, to prosecute Durst for her murder.

Westchester County District Attorney Mimi Rocah reopened the case in May, shortly after taking office. Her office declined to comment on Thursday.