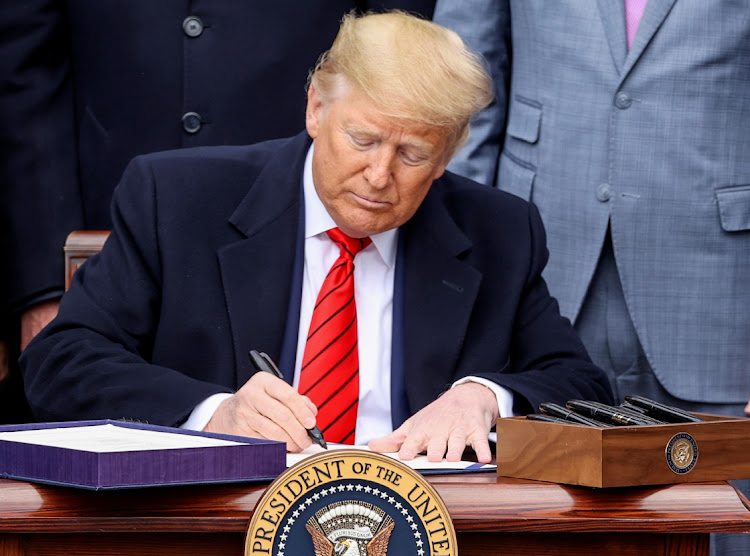 FILE PHOTO: Since Trump was voted out of office in the last presidential elections in 2020, he has repeatedly dropped hints that he might seek the presidency for a third time in 2024.
Image: REUTERS/Jonathan Ernst/File Photo

Former US President Donald Trump will be able to retain the ownership of his newly launched social media venture even if he chooses to make another White House run or is convicted by prosecutors who are looking into his business dealings.

Trump said last week that TRUTH Social would be created through a new company formed by a merger of the Trump Media and Technology Group (TMTG) and blank-check firm Digital World Acquisition Corp.

According to regulatory filings issued late on Tuesday, Trump was referred to as the "company principal," even though the exact size of his stake in the company was not disclosed.

However, the former president is set to keep his ownership in TMTG, even if the company faces a "material disruptive event" - the latest filings include a clause that is designed to shield his stake.

Since Trump was voted out of office in the last presidential elections in 2020, he has repeatedly dropped hints that he might seek the presidency for a third time in 2024.

Trump and his business interests are also the subject of numerous investigations from U.S. authorities - in June, Trump's namesake company and its chief financial officer were indicted, the first charges to arise from a more than two-year probe by New York prosecutors of Trump and his business dealings, Reuters reported.

In the latest filings, DWAC highlighted the risks of being associated with Trump's company.

As part of an earnout clause in the deal, TMTG shareholders will receive an additional 40 million shares, based on the share price performance of DWAC, which on Tuesday closed down nearly 30% but are still trading well above the SPAC's IPO price of $10 a share.

Earlier in October, Reuters reported that the merger with TMTG has delivered a potential windfall of $420m for DWAC's main backer, Patrick Orlando, who has been trying for a decade to reinvent himself as a serial dealmaker.

Former US President Donald Trump's deal to create a social media app after Twitter Inc and Facebook Inc barred him won an exuberant endorsement from ...
News
9 months ago

Former US President Donald Trump will launch his own social media app, TRUTH Social, that he said would "stand up to Big Tech" companies such as ...
News
9 months ago