Migrant caravan in southern Mexico to pause over health concerns 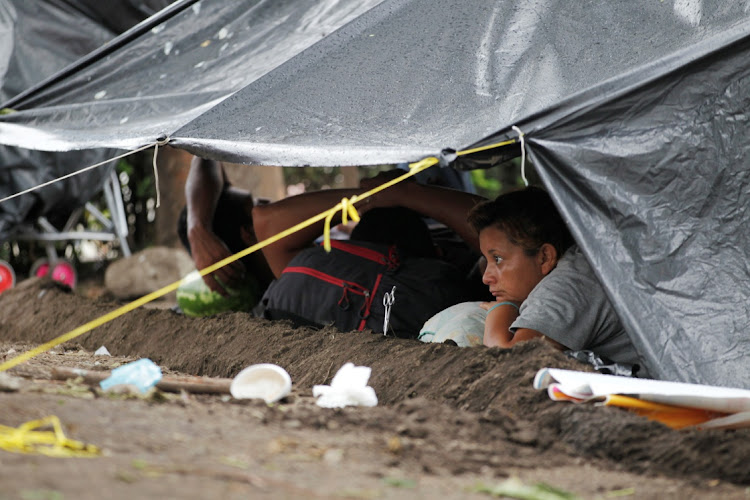 Migrants shelter under an improvised plastic tent before a heavy rain as they take part in a caravan heading to Mexico City, in Mapastepec, Mexico October 31, 2021.
Image: REUTERS/Daniel Becerril

A migrant caravan trekking slowly through southern Mexico will rest a day due to concern over the health of dozens of women and children, one of its organisers said on Saturday, as the government urged the people to accept humanitarian visas.

In often sweltering heat, the group of a few thousand people has during the past week advanced only about 100 kilometres (62 miles) from the city of Tapachula on the Guatemalan border, leaving it still over 1,000km away from Mexico City.

Luis Villagran, a leader of the caravan largely made up of migrants from Central America and the Caribbean, told Reuters the group would stop for a day in the town of Mapastepec to recover from fatigue and some injuries, then restart on Monday.

“There are more than 150 boys and girls who can't walk any more,” Villagran said. “There are pregnant women with sores on their feet who can't continue walking. We estimate there are 90 women in a critical state.”

The government's National Migration Institute (INM), which has sought to disperse caravans, said it wanted to make sure the women and children were looked after, and offered the migrants food and buses to where they could be issued humanitarian visas.

“People's health and their lives should not be put at risk, irrespective of their migration status,” the INM said in a statement.

Leaders of the caravan this week rejected the offer of visas that are meant to grant migrants access to healthcare and regular work, arguing the government had failed to keep promises to help them in the past.

Separately, official data published this week showed that Mexico's detentions of foreign migrants during September leapt to more than 41,000 from around 32,000 a month earlier. That compared with just over 82,000 in all of 2020.