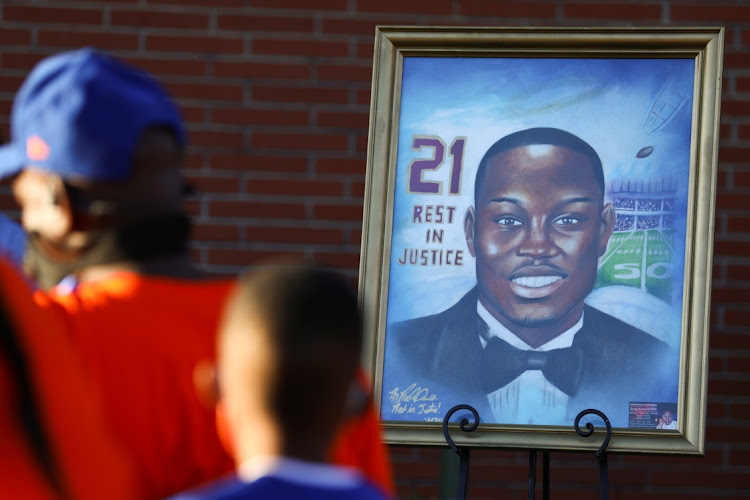 A portrait of Ahmaud Arbery, an unarmed young Black man shot and killed after being chased by a white former law enforcement officer and his son, is pictured during a candle light vigil to mark the one year anniversary of his death, at New Springfield Baptist Church in Waynesboro, Georgia, US February 23, 2021.
Image: REUTERS/Dustin Chambers

Two white men on trial in the killing of Ahmaud Arbery were shown surveillance video of the Black man walking around a half-built house in their southern Georgia neighborhood 12 days before they chased and shot him, a jury heard on Friday.

"Nobody seems to know who this kid is or where he's coming from," Robert Rash, a Glynn County police officer, told the two men, Gregory McMichael and his son Travis McMichael, on the night of Feb. 11, 2020, after showing them the clips, according to body-worn camera video played in court.

The McMichaels and their neighbor William "Roddie" Bryan have pleaded not guilty to murder, aggravated assault and false imprisonment for the shooting, cellphone video of which sparked outrage when it emerged more than two months later.

They face life in prison if convicted of murder at the trial in Glynn County Superior Court in Brunswick, a small city in coastal Georgia.

The men say they thought Arbery might have been the same man caught on camera in the half-built house when he ran past the McMichaels' driveway in Satilla Shores, a leafy, mostly white residential community outside Brunswick, on February 23, 2020.

They pursued him in pickup trucks for several minutes before the younger McMichael pointed a shotgun and fired as Arbery ran toward him and reached toward the weapon. Their lawyers say this was justified self-defense, while prosecutors say the men "assumed the worst" about a Black man out for an afternoon jog.

Arbery was first captured on security cameras going into the house under construction in Satilla Shores on the night of October 25, 2019. Larry English, the property owner, previously testified he wanted police to identify the man in the videos and tell him he was trespassing and not to enter the property again.

Arbery was recorded again walking around the unfenced construction site on Nov. 18, 2019, though once again nothing was taken that day, according to English. Rash told the jury he would show screenshots of the videos to people as he made his rounds but no one was ever able to identify him.

On December 20, 2019, Rash saw Greg McMichael, whom he knew from McMichael's old job as an investigator for the local district attorney, in front of his house.

"I talked to him in reference to the unidentified Black male," Rash said.

McMichael asked the officer to give his cellphone number to English. Rash said he did this because McMichael had the "training and experience" to be a good witness to make a helpful call to 911 if the man returned.

"So you wanted him to be a witness, to get this guy identified?" Dunikoski asked.

Prosecutors are seeking to rebut a defense argument that the men were trying to make a citizen's arrest on Arbery under a now-repealed Georgia law. That law required there to be reasonable belief that someone is fleeing from a serious felony crime they just committed.

On the night of February 11 neighbors saw Arbery again on the property, and Travis McMichael rushed over with his gun and saw Arbery briefly in his car headlights.

Rash soon arrived on the scene and played for the McMichaels some of the videos English had sent to his cellphone.

"This guy's always on foot, nobody in the neighborhood knows who he is," Rash tells the McMichaels, according to video from his body-worn camera. He tells them that English has only ever seen Arbery nosing around. "He hasn't seen him actually take anything," Rash says.

Georgia overhauled a Civil War-era law Wednesday that allowed residents to arrest anyone they suspected of committing a crime — a “citizens arrest” ...
News
1 year ago

The mother of Ahmaud Arbery filed a federal civil rights lawsuit on Tuesday against the three men accused of killing her son, a Black man who was ...
News
1 year ago