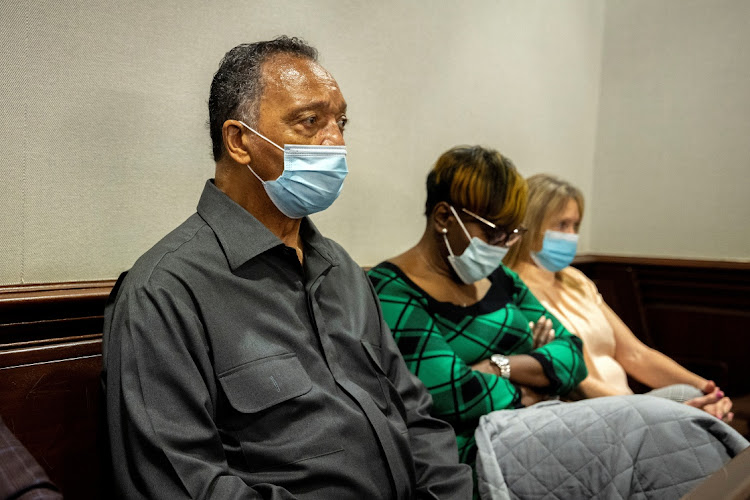 The Rev. Jesse Jackson, sits with Ahmaud Arbery's mother, Wanda Cooper-Jones, during the trial of Greg McMichael, his son, Travis McMichael, and a neighbor, William "Roddie" Bryan in the Glynn County Courthouse, in Brunswick, Georgia, US November 15, 2021. The three are charged with the February 2020 slaying of 25-year-old Ahmaud Arbery.
Image: Stephen B. Morton/Pool via REUTERS

A lawyer for one of the three white men charged with murdering Ahmaud Arbery, a Black man, in their southern Georgia neighborhood failed in an attempt to have the judge remove civil rights leader Rev. Jesse Jackson from the courtroom on Monday.

The same lawyer, Kevin Gough, made a similarly unsuccessful attempt last week to get the court to prevent any more "Black pastors" attending the trial after the Rev. Al Sharpton, another civil rights leader, was seen sitting with Arbery's parents in the public gallery.

After the jury was sent out, Gough stood in the Glynn County Superior Court and said he objected to what he called "an icon in the civil rights movement" sitting between Arbery's parents.

"How many pastors does the Arbery family have?" he said, referring to a similar objection he had made on Thursday to Sharpton's visit. "The seats in the public gallery of a courtroom are not like courtside seats at a Lakers game."

Cell phone footage made by Gough's client, William "Roddie" Bryan, of the fatal shooting of Arbery after he was chased through Satilla Shores on a Sunday afternoon in February 2020 drew outrage when it was published more than two months later.

Prosecutors say Arbery was an avid jogger, and his killing was seen by some as another example of a Black man facing dangerous suspicion while doing some banal activity in public.

Jackson quietly listened to Gough, holding the hands of Arbery's father, Marcus Arbery Sr., and mother, Wanda Cooper-Jones. When Gough, who wore no Covid-19 mask, complained that Jackson's mask was not covering his mouth and nose, Cooper-Jones reached and lifted Jackson's mask back up.

Judge Timothy Walmsley was audibly exasperated as he rejected the motion by Gough, saying his ruling last week that he would not issue any blanket bans on who could enter a public courtroom would still stand. He said he was not aware that Jackson was in the room until Gough made his motion.

The judge said it was odd that Gough kept objecting to Black pastors showing up and that he was "done talking about it."

"At this point, I'm not exactly sure what you're doing," the judge said. "It's almost as if you're just trying to keep continuing this for purposes other than just bringing it to the court's attention and I find that objectionable."

Jackson said outside the courthouse during a break in proceedings that he planned to attend all week, calling it "a constitutional right and a moral obligation."

"They're looking for diversion," he said of the defense lawyers.

Sharpton has said he will be joined by more than 100 Black pastors at the courthouse on Thursday.

Two white men on trial in the killing of Ahmaud Arbery were shown surveillance video of the Black man walking around a half-built house in their ...
News
2 months ago

Bryan, 52, is standing trial alongside father and son Gregory McMichael, 65, and Travis McMichael, 35, on charges of murder, assault and false imprisonment.

They have pleaded not guilty, saying they were justified in chasing Arbery in their pickup trucks because they thought he may have committed some sort of crime. They do not dispute that the younger McMichael killed Arbery with a shotgun, but say this was self defense after Arbery turned toward him and reached for the raised weapon.

After Jackson was permitted to remain in court, Gough said he wanted to move for a mistrial based on an emotional "outcry" by Arbery's mother from the public gallery when a photograph of Arbery was shown to jurors on Monday. Several jurors looked over as she sobbed.

Lawyers for the McMichaels joined the motion.

The judge overruled it, reading from a legal precedent that said "emotions are neither unreasonable nor unexpected during murder trials."