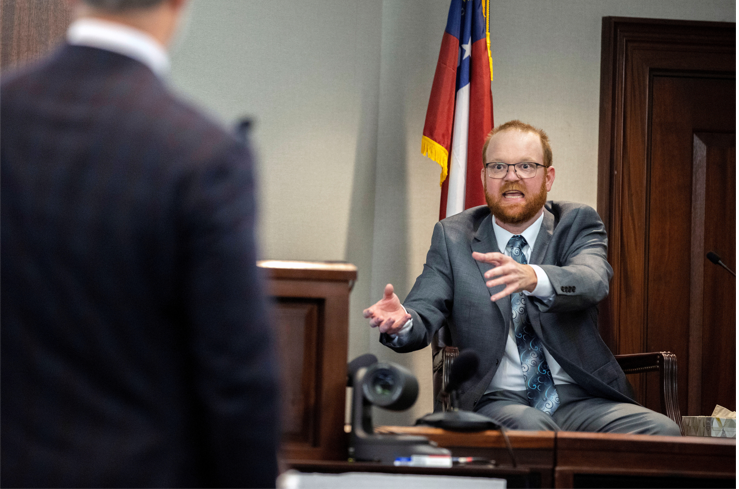 Travis McMichael speaks from the witness stand during the trial of Greg McMichael, his son Travis McMichael and William "Roddie" Bryan in the Glynn County Courthouse, as the murder trial over the killing of Ahmaud Arbery continues, in Brunswick, Georgia, US on November 17, 2021.
Image: Stephen B. Morton/Pool via REUTERS

Travis McMichael testified at his murder trial on Wednesday that he shot Ahmaud Arbery because he thought the Black man was attacking him after McMichael and his two co-defendants chased Arbery through a mostly white Georgia neighborhood.

In over three hours on the stand, McMichael, who is white, sought to convince jurors he had good reason to grab his shotgun and jump into his pickup truck with his father to chase Arbery last year, saying they thought Arbery might be a burglar.

He frequently used police jargon and invoked law-enforcement training he got when he was a US Coast Guard mechanic. Holding back tears, he said 25-year-old Arbery had frightened him.

"You pull a weapon on someone, from what I've learned in my training, usually that tells people to back off," he said, explaining why he aimed his pump-action 12-gauge shotgun at Arbery.

Arbery, however, ran toward McMichael at the end of a chase lasting about five minutes on February 23, 2020, through Satilla Shores, a cluster of homes outside the small coastal city of Brunswick.

"I shot him. He had my gun," McMichael said, his voice trembling as he described a split-second when they grappled over the weapon.

"It was a life or death situation," he said. McMichael fired at Arbery three times, tearing two deadly gaping wounds in his chest.

Prosecutors said Arbery was an avid runner on an afternoon jog, and cellphone footage of the killing sparked outrage when it emerged two months later.

McMichael, 35, has pleaded not guilty to murder and other crimes alongside two other white defendants: his 65-year-old father, Gregory McMichael, and their neighbor William "Roddie" Bryan.

The decision to testify in his own defense was a risky legal maneuver. McMichael will now face questions from prosecutors, who have said they may ask him about Bryan's report that McMichael uttered a racial slur as he stood over Arbery's body.

The prosecution rested its case on Tuesday against the three white men charged with murdering Ahmaud Arbery after presenting evidence it said showed ...
News
2 months ago

HEY, WHAT ARE YOU DOING?

McMichael told jurors his decision to grab a gun and chase Arbery was driven by an encounter 12 days before, when he saw Arbery "creeping in the shadows" at night around a house under construction nearby.

Police had told the McMichael men that nothing was taken on that day. But they nonetheless suspected Arbery had committed theft on a different occasion and that he may have been armed on the night of Feb. 11 because of the way he seemed to reach for his waistband or pocket.

The property's owner has said through his lawyer that Arbery probably stopped to drink from a water faucet. Arbery had nothing on him besides his running clothes and shoes on the day he was shot.

Defense lawyers have said the men were legally trying to stop Arbery under a now-repealed Georgia citizen's arrest law.

McMichael, however, repeatedly said he chased Arbery only to ask him questions and that he wrongly believed his father had called 911.

"I ask him: 'Hey, what are you doing? What's going on?'" McMichael testified, saying he pulled alongside Arbery running in the road. Arbery never spoke a word in reply and looked angry with clenched teeth, McMichael said.

"He was mad, which made me think something's happened," McMichael said.

Speaking calmly and often turning to address the jurors directly, McMichael said he had arrest powers while in the US Coast Guard and was trained on using force and the need for reasonable suspicion of a crime, although he never had cause to use force while on duty.

In cross examination, which was due to continue on Thursday, McMichael agreed with prosecutor Linda Dunikoski that he had been trained in constitutional limitations on law enforcement powers.

"So you learned in your time in the military that you can't force anyone to speak with you?" Dunikoski asked.

"And that if someone walks away, you have to let them walk away?" she asked.

A lawyer for one of the three white men charged with murdering Ahmaud Arbery, a Black man, in their southern Georgia neighborhood failed in an ...
News
2 months ago

Two white men on trial in the killing of Ahmaud Arbery were shown surveillance video of the Black man walking around a half-built house in their ...
News
2 months ago

Georgia overhauled a Civil War-era law Wednesday that allowed residents to arrest anyone they suspected of committing a crime — a “citizens arrest” ...
News
9 months ago