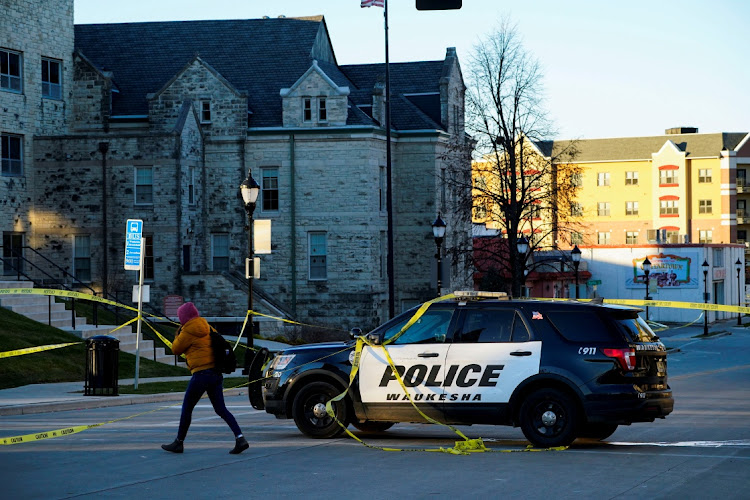 A person walks past a police car blocking Main Street the morning after a car ploughed through a holiday parade in Waukesha, Wisconsin, US, November 22, 2021.
Image: REUTERS/Cheney Orr

Authorities will charge a 39-year-old man with multiple counts of homicide for driving into a crowded Christmas parade in Wisconsin, killing five, as he fled the scene of an earlier domestic disturbance, police said on Monday.

Police in Waukesha, a small city roughly 20 miles (32 km) west of Milwaukee, say they do not know what caused Darrell E. Brooks, a resident of Milwaukee, to drive into the crowd, injuring 48, including two children in critical condition.

"He drove right through the barricades and the officers," Waukesha Police Chief Daniel Thompson told a briefing, adding the incident was not related to terrorism. Police were not pursuing Brooks when he plowed into the parade, he said.

"Minutes after the incident occurred, I responded to the scene," Thompson said. "And what I saw out of chaos and tragedy was heroes -- first responders in the community coming together and working together on triaging victims."

A police officer opened fire at the suspect but had to stop for the safety of bystanders, Thompson said.

On the morning after Sunday's carnage, a pink hat, a lone shoe and candy lay strewn across the main thoroughfare in Waukesha.

Dozens of orange evidence circles were painted on the street and most shops were closed in the city's downtown district. A woman tied a bouquet of flowers to a street post as police officers blocked intersections along the main road.

The FBI is assisting local police in their investigation.

Brooks was previously charged with restricting or obstructing an officer, bail jumping and battery. A $1,000 cash bond was posted earlier this month, according to a statement by the Milwaukee County District Attorney's office.

"The state's bail recommendation in this case was inappropriately low in light of the nature of the recent charges and the pending charges against Mr. Brooks," read the statement, which said the office was conducting an internal investigation.

Five people were killed and more than 40 injured after an SUV sped through a Christmas parade in Waukesha, Wisconsin, on Sunday, knocking down dozens ...
News
1 week ago

"It was terrifying," said Waukesha resident Brian Hoffman, 33, who was present as the vehicle rammed through parade attendees.

"I saw children who were ran over," Hoffman said sitting on a stoop near the scene that was still blocked off by police. "I am still totally shocked."

The Children's Wisconsin hospital officials said at a briefing they treated 18 children, including six who remained in critical condition and three in serious condition on Monday.

The rest were in fair condition or released. The hospital made no mention of any fatalities.

Among the victims were members of a group of "Dancing Grannies," according to a statement posted on Facebook on Monday.

"Those who died were extremely passionate Grannies. Their eyes gleamed.....(with the) joy of being a Grannie. They were the glue....(that) held us together," read the message posted on the Milwaukee Dancing Grannies Facebook page. "Our hearts are heavy at this most difficult time."

Schools will remain closed on Monday and additional counselors will be available for students, the district superintendent of schools said. Waukesha authorities said a fund for the affected families had been set up.

US President Joe Biden said his administration was monitoring the situation in Waukesha "very closely."

"The entire community is struggling, struggling to cope with these horrific acts of violence," Biden told reporters on Monday.