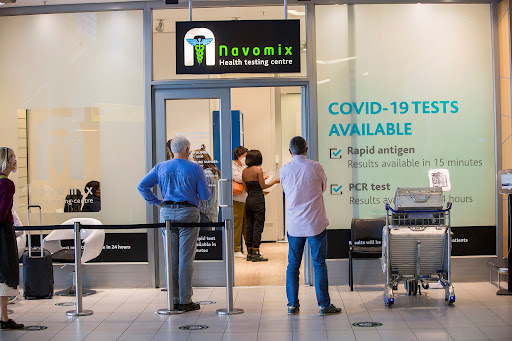 The speed of the discovery of the Omicron variant is a testament to SA’s gene-sequencing capabilities. File image.
Image: Bloomberg

In early November, laboratories in Gauteng started picking up something unusual while processing Covid-19 tests: they weren’t able to detect the virus’ S-gene, which creates the spike protein that enables the pathogen to enter human cells and spread.

Around the same time, doctors in the region saw a sudden flood of patients suffering fatigue and headaches. The new cases appeared after weeks of calm following a Delta variant-driven third coronavirus wave which had ripped through Johannesburg and Pretoria in July.

The developments heralded the onset of a wave of infections with the Omicron variant in the country. It swiftly became the dominant strain and has driven a new surge in cases. The November 25 announcement of its discovery triggered global panic and a market meltdown, with countries including the UK and the US imposing flight bans to and from SA. By Tuesday, the mutation had been found in at least 15 countries.

The anomalies were first detected by scientists at the privately owned Lancet Laboratories, who sounded the alarm, according to Glenda Gray, president of the SA Medical Research Council .

“They didn’t know what was wrong so they alerted virologists, who began to sequence the samples,” she said in a November 29 interview.

Junior Lancet scientist Alicia Vermeulen was credited with making the initial find on the afternoon of November 4 when she noticed an anomaly in a single positive test and told her manager, according to News24. Over the next week, the same anomaly was picked up several times, and Allison Glass, head of molecular pathology at Lancet and a member of government’s Ministerial Advisory Council on Covid-19, was informed, the website reported.

Together with the National Institute for Communicable Diseases, Lancet was able to determine by November 22 that there was a new variant, initially known as B.1.1.529, News24 reported. The S-gene couldn’t be detected because it had mutated, it said.

Scientists in Botswana had meanwhile also picked up the same anomalies in samples from tests conducted on travellers in early November, and the quirk also surfaced in a sample taken from a person who had travelled to Hong Kong and was in quarantine.

The data was uploaded onto GISAID, a global repository, and quickly leaked. By November  24 there were initial reports about the new variant in the British media.

Nicholas Crisp, acting director-general of the department of health, said he was informed on the evening of November 24. Other key government officials were told early the next day and a press conference was hastily convened, where Tulio de Oliveira, the head of two gene-sequencing institutes in SA, announced the discovery.

At the moment doctors said, Omicron seems to be causing mild disease. But with the outbreak initially taking off in a relatively young cohort of college students it’s hard to tell what the effect may be once it takes hold in older, more vulnerable segments of the population.

“Whatever I tell you today may be false tomorrow,” Gray said.

The World Health Organisation (WHO) has warned of the potential for Covid-19 surges with “severe consequences” fuelled by Omicron, whose constellation of mutations suggests it may be both more transmissible and capable of evading the immunity provided by vaccination or an earlier infection.

The speed of the discovery is a testament to SA’s gene-sequencing capabilities built up with the aid of research money ploughed into tackling other diseases. The country has the most people infected with HIV in the world and has one of the largest tuberculosis epidemics.

“SA has some world-class virologists and gene sequencers. We have this because of HIV and TB,” Gray said.

“All these people have transitioned to Covid-19.”

The events that unfolded after Omicron’s discovery have dismayed the SA government and business groups. Flight bans were quickly imposed as the crucial summer holiday season began, and threaten to derail efforts to rebuild an economy that contracted by the most in at least 27 years in 2020.

“We have to question the purpose of creating the panic the public announcement has no doubt created,” said the SA Chamber of Commerce and Industry, the country’s biggest business group.

While the WHO said SA and Botswana should be thanked for the speed of the announcement, the response has instead felt like punishment.

“Our scientists did what they were supposed to do, they did what they are ethically obliged to do,” said Angelique Coetzee, chairperson of the SA Medical Association.

“Now we are the villains of the global travel community.”

Data so far suggest transmissibility of Omicron is increased and is being driven by younger people, say experts
News
5 months ago

Omicron variant was detected in the Netherlands before SA flights

The Covid-19 Omicron variant was detected in the Netherlands before two flights arrived from SA last week, Dutch health officials said on Tuesday.
News
5 months ago

LISTEN | What you need to know about the new Omicron variant

The emergence of a new Covid-19 variant B.1.1.529, named Omicron by the World Health Organisation, has rattled many people as the world battles an ...
News
5 months ago