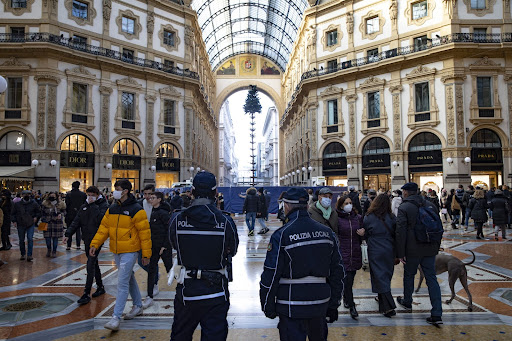 Only 12.3% of Italians over 12, some 6.6 million people, haven’t been inoculated, and shots for children aged 5-11 are due to start later this month after the vaccine by Pfizer Inc. and BioNTech SE received approval by Italy’s drug agency.
Image: Bloomberg

Italy, which has one of Europe’s highest vaccination rates, is further cracking down on the small minority that has so far refused the shot.

As of Monday, a green pass — which is proof of vaccination, recovery or a recent negative test — will be required for buses, metro, local trains and hotels. It’s already compulsory for working, long-distance travel and most indoor venues.

A new “reinforced” green pass, which can be obtained only with the vaccine or after recovering from Covid-19, will be required for many leisure activities, including eating inside restaurants, and going to theatres, cinemas, sporting and other public events.

The aim of the new rules, which were announced in late November, is to stem the resurgence of the pandemic and ensure that the crucial Christmas shopping season can take place normally. Italy’s economy is growing faster than most European partners, and Prime Minister Mario Draghi wants to keep that momentum as he pushes through reforms aimed at reversing decades of stagnation.

While it has so far stopped short of introducing a blanket vaccine mandate, Italy introduced some of Europe’s toughest vaccination rules earlier than others. A green pass has been required to work and travel since mid-October.

As cases spiked across the continent, other European countries have adopted a similar approach. Germany’s government on Thursday became the latest to ramp up its response, putting stringent restrictions on the unvaccinated and weighing compulsory shots. Austria has already proposed mandatory vaccinations, while other countries plan to fine those who refuse.

Italy is facing a new wave of infections, albeit to a lesser degree than other European countries, with 16,632 new cases on Saturday and hospitals and intensive care units slowly filling up. Nine patients with the omicron variant have been identified, most linked to a person returning from Southern Africa.

Only 12.3% of Italians over 12, some 6.6 million people, haven’t been inoculated, and shots for children aged 5-11 are due to start later this month after the vaccine by Pfizer Inc. and BioNTech SE received approval by Italy’s drug agency.

Two regions, Friuli-Venezia Giulia and Trentino-Alto Adige, have already reintroduced minor restrictions, and other areas may be forced to follow suit if infection numbers continue to rise. Italy has a four-level automatic system, with curbs on business and movement automatically kicking when certain levels of new cases and hospital occupancy are reached.

“A vast majority of Italians have chosen to get vaccinated,” Public Administration Minister Renato Brunetta said in an interview with Corriere della Sera on Sunday. “The strategy is to have more than 90% of the population with two shots.”

Zambia has detected its first cases of the Omicron coronavirus variant in three people who tested positive for Covid-19 in the past week, the health ...
News
1 month ago

Higher hospital admissions among children during a fourth wave of Covid-19 infections in South Africa that is driven by the Omicron variant should ...
News
1 month ago

Looking to the government for leadership on vaccines, now

The emergence of the Omicron Covid-19 variant and SA’s slow progress in administering vaccines to the population have brought the controversial ...
Opinion & Analysis
1 month ago

The velocity of the mutations also raises questions about how the variant evolved and adds to the puzzle of how transmissible the variant may be.
News
1 month ago