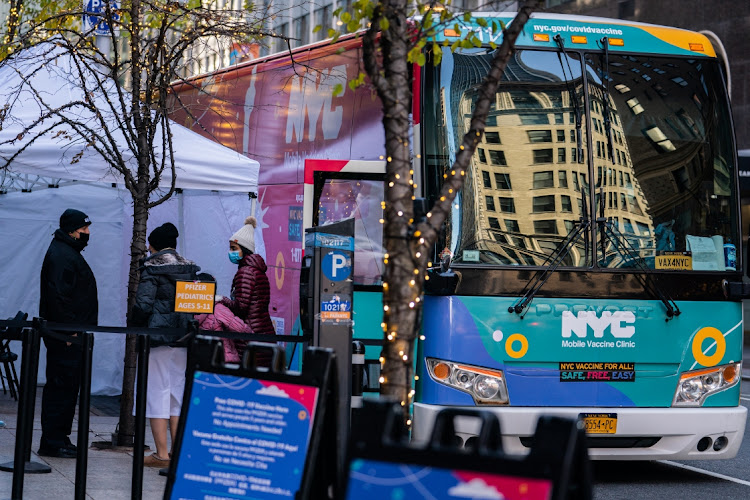 New York City set a December 27 deadline for all 184,000 businesses within its limits to make their employees show proof that they have been vaccinated.
Image: Jeenah Moon/Bloomberg

New York City declared on Monday that all private-sector employers must implement Covid-19 vaccine mandates for their workers, as the highly transmissible Omicron variant has spread to at least one-third of US states.

The biggest US city set a December 27 deadline for all 184,000 businesses within its limits to make their employees show proof that they have been vaccinated.

In addition, children 5 to 11 years old must get at least one vaccine dose by December 14 to enter restaurants and to participate in extracurricular school activities, such as sports, band, orchestra and dance, Mayor Bill de Blasio said.

"Vaccination is the way out of this pandemic, and these are bold, first-in-the-nation measures to encourage New Yorkers to keep themselves and their communities safe,” de Blasio, who leaves office next month, said in a statement.

De Blasio's successor, Eric Adams, “will evaluate this mandate and other COVID strategies when he is in office and make determinations based on science, efficacy and the advice of health professionals,” said his spokesperson Evan Thies.

The requirements come at a time when new coronavirus infections are accelerating nationwide, especially in northern states, as colder weather has encouraged more mingling and socializing indoors.

Over the last week, the country has averaged more than 120,000 new infections a day, up 64% from the prior week, according to a Reuters tally.

Deaths, which lag infections, have averaged 1,300 a day over the last seven days, up from an average of 800 a day a week ago, according to Reuters data.

Omicron, first detected last month in southern Africa, has spread around the globe and shows signs of being more contagious than the Delta variant.

Louisiana has also reported a probable Omicron case in a crew member on a cruise ship that disembarked in New Orleans over the weekend. At least 17 COVID-19 cases were detected on the ship and more testing is underway, state health officials said.

Several Wall Street banks headquartered in New York, including Goldman Sachs Group Inc, Morgan Stanley and Citigroup, already require vaccines for anyone coming into their offices. JPMorgan Chase & Co, the largest U.S. bank, has so far allowed unvaccinated employees to come to work in offices if they submit to twice-weekly COVID-19 tests.

Alphabet Inc's Google and Meta's Facebook, which also have operations in New York City, also already require all U.S. employees to be vaccinated to enter buildings.

A nationwide vaccine mandate issued earlier this year by President Joe Biden for companies with 100 workers or more has been tied up in litigation. In November, a US appeals court upheld its decision to put on hold the order.

"We are confident because it's universal," he said on MSNBC.

How a vaccine side-effect database has sowed doubt in vaccinations

No doses, too many doses, scepticism: all collide to stymie Africa’s vaccine rollout

President Cyril Ramaphosa says he is expecting a report from the task team set up to investigate the question of vaccine mandates 'soon'.
Politics
6 months ago