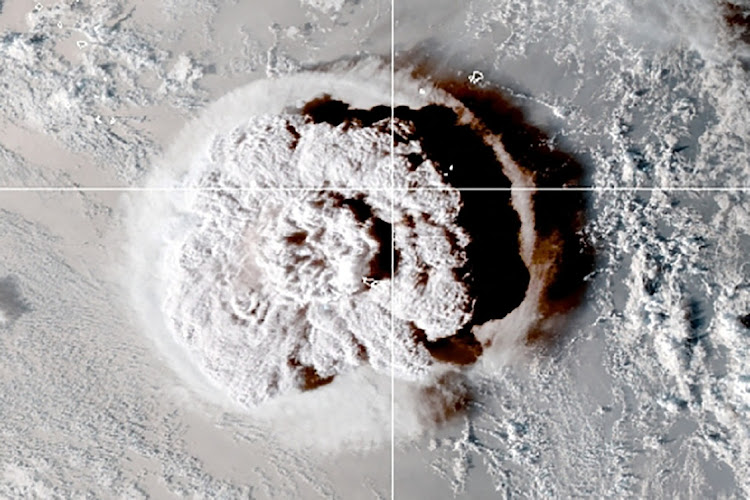 The eruption of an underwater volcano off Tonga, which triggered a tsunami warning for several South Pacific island nations, is seen in an image from the NOAA GOES-West satellite taken at 05:00 GMT on January 15 2022.
Image: CIRA/NOAA/Handout via Reuters

Tsunami-hit Tonga remained largely uncontactable on Sunday with telephone and internet links severed, leaving relatives in faraway New Zealand praying for their families on the Pacific islands as casualty reports had yet to come through.

An subterranean volcano off Tonga erupted on Saturday, triggering warnings of 1.2m tsunami waves and evacuation orders on the shores of Tonga as well as several South Pacific islands, where footage on social media showed waves crashing into coastal homes.

Internet and phone lines went down at about 6.40pm local time on Saturday, leaving the 105,000 residents on the islands virtually uncontactable.

There are no official reports of injuries or deaths in Tonga as yet though communications are limited and contact has not been established with outlying coastal areas beyond the capital Nuku'alofa and closer to the volcano, New Zealand Prime Minister Jacinda Ardern said on Sunday.

“Nuku'alofa is covered in thick plumes of volcanic dust but otherwise conditions are calm and stable,” Ardern said. 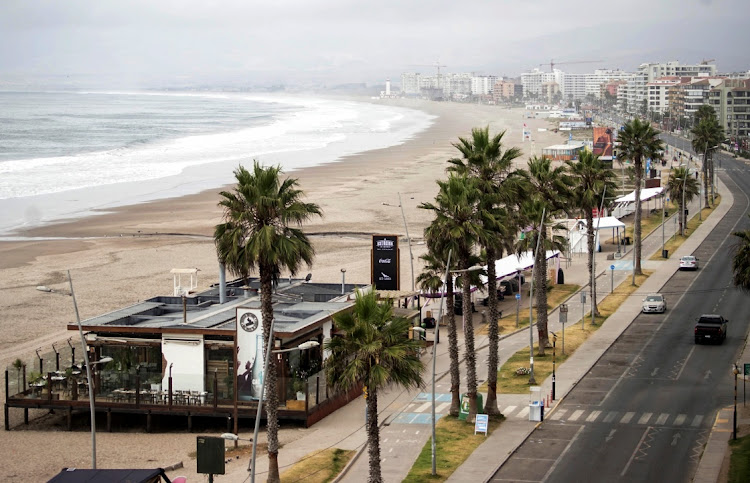 An empty beach is pictured after mass evacuation from the coastline in Chile, following a tsunami preventive advisory generated by local authorities, after an underwater volcano eruption on the island of Tonga, at the South Pacific, La Serena, Chile, on January 15 2022.
Image: REUTERS/Alejandro Pizarro Ubilla

“There are parts of Tonga where we just don't know yet ... we just haven't established communication.”

Satellite images captured the volcanic eruption on Saturday as the explosion sent plumes of smoke into the air and about 19km above the sea level. The sky over Tonga was darkened by the ash.

Concerns were growing among the Tongan community in New Zealand, desperate to make contact with their families back home. Some churches organised community prayers in Auckland and other cities.

“We pray God will help our country at this sad moment. We hope everybody is safe,” Maikeli Atiola, the secretary of the Wesleyan Church of Tonga in Auckland said, Radio New Zealand reported.

Ardern said the main undersea communications cable has been affected, likely due to loss of power.

Power was being restored in some areas on the islands and local mobile phones were slowly starting to work, she added.

Official damage assessments were not yet available, she said, but the New Zealand high commission in Nuku'alofa had told her the tsunami has had a significant affect on the foreshore on the northern side of Nuku'alofa, with boats and large boulders washed ashore.

“Shops along the coast have been damaged and a significant cleanup will be needed,” she said.

Australia said it will send a P8 surveillance aircraft to Tonga on Monday to assess damage to critical infrastructure such as roads, ports and power lines, which will determine the next phase of the response effort.

The Hunga-Tonga-Hunga-Ha'apai volcano has erupted regularly over the past few decades but Saturday's eruption was so loud that residents in parts of faraway Fiji and New Zealand said they heard it.

“My entire house was shaking,” said Sanya Ruggiero, a consulting communications adviser based in Suva, the capital of Fiji, some 750km from Tonga.

“My doors, windows were all rattling like hell. And mine was not even as bad as others. Hundreds of people ran out of their homes,” said Ruggiero, who consults for several agencies including the UN. 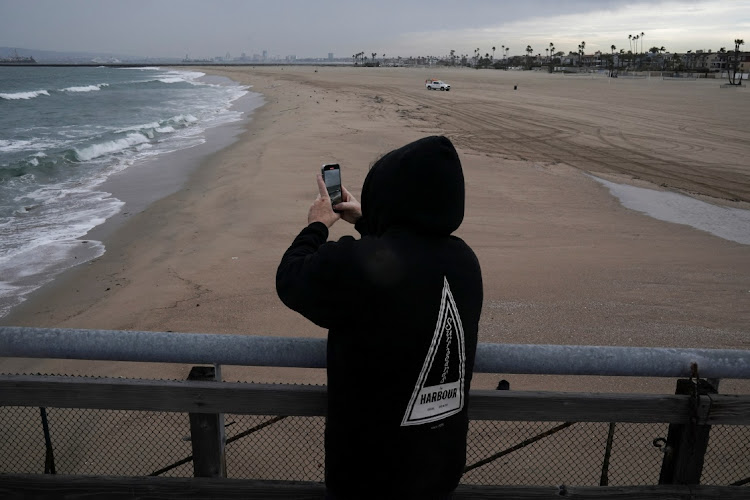 Doctor Ernst Von Schwarz uses his mobile phone to record waves from the Seal Beach municipal pier after a tsunami advisory was issued, following an underwater volcano eruption over 8500km away, in Seal Beach, California, US, on January 15 2022.
Image: REUTERS/Bing Guan

Rumblings and eruptions from the volcano continued to be heard through the night, Ruggiero said. Hundreds of people were moved to evacuation centres in Suva. Fiji Airways had to cancel all its flights due to the ash clouds.

“This is the worst disaster Tonga has had in living memory and the recovery from this is going to take years,” Ruggiero said.

Experts said the ash fallout could contaminate drinking water and cause respiratory issues.

“Help will be needed to restore drinking water supplies. People of Tonga must also remain vigilant for further eruptions and especially tsunami with short notice and should avoid low lying areas,” said Shane Cronin, professor at the School of Environment, University of Auckland.

The eight-minute eruption on Saturday triggered tsunami warnings and evacuations in several countries. The eruption caused flooding across portions of coastal Alaska and California in the US.

Floods from the tidal waves were also reported in Chile, some 10,000km away, and hundreds of thousands of Japanese citizens were advised to evacuate as waves of more than a metre hit coastal areas. 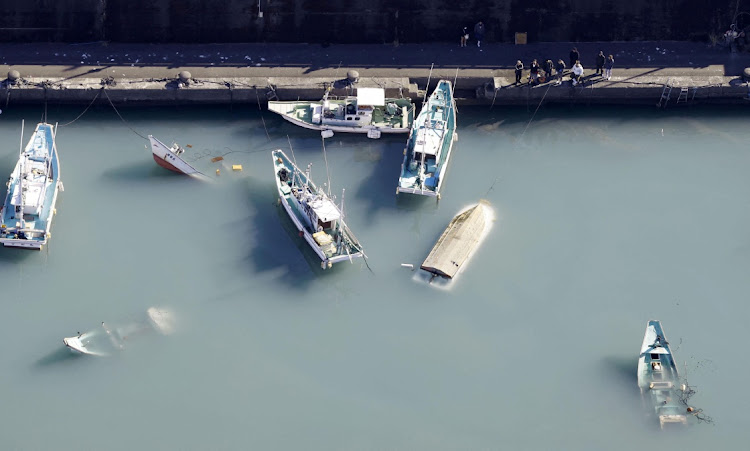 An aerial view shows capsized boats believed to be affected by the tsunami caused by an underwater volcano eruption on the island of Tonga at the South Pacific, in Muroto, Kochi prefecture, Japan, in this photo taken by Kyodo on January 16 2022.
Image: KYODO via Reuters

In a barren landscape covered in ash, homes were almost completely submerged.
News
8 months ago

Over a million Indians to gather beside Ganges, defying Covid-19 surge

Hundreds of thousands of Hindu worshippers are expected to gather on the banks of the Ganges river on Friday for a holy bathe despite a 30-fold rise ...
News
6 months ago

All the remaining hostages being held at a synagogue in Colleyville, Texas, were safely released on Saturday night more than ten hours after a gunman ...
News
6 months ago