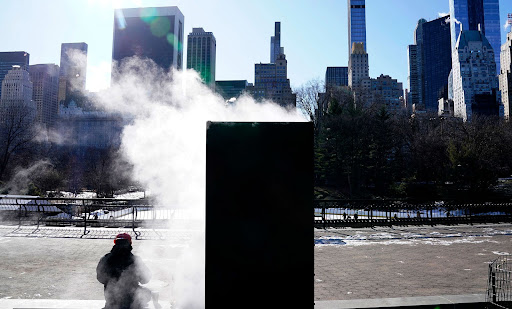 Large break waves up to 13 feet (4 meters) could crash into Long Island, and tides could rise about 3 feet above normal throughout New York, New Jersey and Connecticut.
Image: Bloomberg

A fast-moving winter storm has knocked out power to thousands across the US South, cancelled and delayed flights, and will bring snow by the foot across mountains of New York and Pennsylvania and soaking rain to the large cities on the Interstate 95 corridor.

Washington may get an inch of snow before rain starts to fall late Sunday. Philadelphia, New York City and Boston will likely get rain as the storm tracks close to the coast overnight, said Rich Otto, a forecaster with the US Weather Prediction Center. The combination of a nearly full moon and high winds blowing onshore will also raise the risk of coastal flooding in New York, New Jersey and Long Island through Monday afternoon.

Large break waves up to 13 feet (4 meters) could crash into Long Island, and tides could rise about 3 feet above normal throughout New York, New Jersey and Connecticut.

“It is going to pull in a lot of warm air, so in the cities, places like Philadelphia, New York and Boston, generally it is going to be all rain,” Otto said. “The heaviest snow will be in the Appalachians, places in western Pennsylvania and western New York could easily see a foot of snow.”

Across the US southeast, more than 140,000 customers were without power, according to PowerOutage.us. The storm brought ice and snow across northeastern Georgia and parts of western South Carolina, which are the areas hit heaviest by the outages.

More than 2,400 flights have been cancelled around the US with the majority of those in Charlotte and Atlanta, according to FlightAware, an airline tracking company in Houston. Winter storms affecting Atlanta and New York can spread ripples of delays and cancellations across the entire US.

Early Sunday, winter storm warnings and weather advisories stretched from eastern Arkansas to Maine, according to the National Weather Service. On the storm’s southern flank, strong winds were gusting across Alabama, Mississippi, Georgia and Florida, where some tornadoes were spotted.

It will move up the East Coast through the day, bringing snow to Washington at first about 4pm before that changes to rain, Otto said. Rain will reach New York City about 10pm and in Boston it will start falling after midnight.

“It is a fairly quick moving storm,” Otto said. “This storm is not going to linger.”