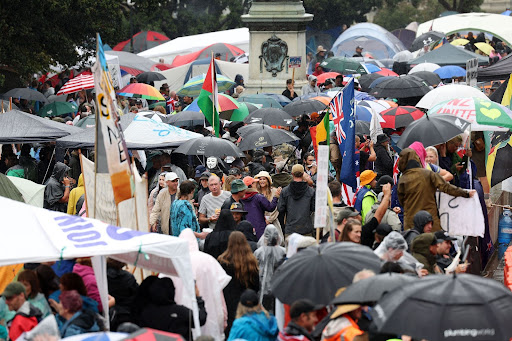 New Zealand protesters occupying parliament grounds in Wellington were bombarded by a cyclone and Barry Manilow songs over the weekend, but vowed to stay until the government ends vaccine mandates.
Image: Bloomberg

New Zealand protesters occupying parliament grounds in Wellington were bombarded by a cyclone and Barry Manilow songs over the weekend, but vowed to stay until the government ends Covid-19 vaccine mandates.

The protest entered its seventh day on Monday with the lawns in front of parliament covered by a sea of tents and a large and noisy crowd in attendance. When the remnants of Cyclone Dovi lashed the capital city on Saturday with high winds and torrential rain turning the grounds into a mud bath, protesters covered the area with hay.

They also withstood efforts by parliament’s speaker, Trevor Mallard, to oust them by blasting songs from Manilow, James Blunt and Celine Dion over loud speakers — a tactic police said they would not have endorsed.

Concerns are growing about sanitation at the site, particularly as some protesters have small children with them. Streets around parliament remain blocked by cars and campervans, frustrating local businesses, but police appear unwilling to precipitate further confrontation after making more than 120 arrests last week.

Prime minister Jacinda Ardern has appealed to the demonstrators to “go home and take your children”, saying their actions have gone “beyond a protest”  .

“This is not any form of protest I’ve seen before,” she told Radio New Zealand.

“We’ve seen [former US president Donald] Trump flags, Canadian flags. Children and young people on their way to school are being abused. Businesses are seeing people occupy their spaces. There are signs there calling for the death of politicians. We all want them to leave.”

“We continue to appeal to protesters to leave the demonstration and take their children,” he said.

“We have concerns about the health risks posed and sanitation issues.”

The protest was inspired by the recent anti-mandate trucker convoy in Canada. In neighboring Australia, a similar demonstration has been taking place in Canberra, where protesters have gathered for weeks to call for an end to vaccine mandates.

Slow down, world, we haven’t reached the Covid finish line

As countries start to lift restrictions, scientists worry governments haven’t learnt from the past and are moving too fast
World
5 months ago

Anti-vax Aussies cause chaos in and around capital Canberra